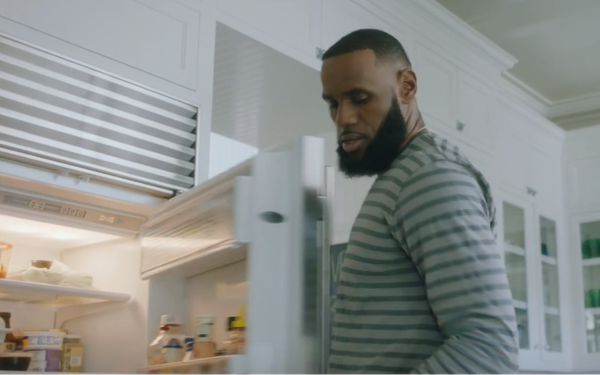 "There are no magic pills." The phrase is not original or even profound, but coming from American World Cup alpine ski racer Lindsey Vonn or NBA legend LeBron James, it has a different ring to it.

Vonn and James are two of the celebrity founders of Ladder, a new wellness company whose other co-founders are Cindy Crawford and Arnold Schwarzenegger. The company sells direct-to-consumer energy powders and other supplements along with content and guidance.

To introduce this subscription-based brand to the world, the agency Human Design created a series of commercials and a viral media campaign.

The 60-second anthem “We Are Ladder” features all four celebrities and other happy, healthy-looking people engaged in daily activities, from gym sessions to cooking and spending time with family. Throughout the spot, individuals repeat mantras such as, “There is strength in numbers,” "There is no magic pill,”  and “Life is a workout.”

Social media cutdowns will also be created so the work can be featured as Facebook posts and Instagram posts and stories. The goal is to drive viewers to the company’s website to customize a plan.

“This isn’t a typical celebrity endorsement for a product that was created independent of the celebrity,” John Weiss, Human Design's chief creative officer, tells Marketing Daily. “Each founding celebrity is heavily invested in the product’s efficacy and benefit for people who use it.”

“After LeBron’s infamous cramping during the 2014 NBA Finals, he and his trainer worked together to find new ways to improve his diet,” Gray tells Marketing Daily.

“While researching the available nutrition products on the market, they realized that none of these options met LeBron’s needs for quality and safety. [They] worked with a private lab to create a new formula. Two years later, Arnold Schwarzenegger found himself facing a similar struggle, so he and LeBron discussed the possibility of creating a brand together to provide quality health information and products.”

Lindsey Vonn also struggled to find nutrition products that met the rigorous standards of the World Anti-Doping Agency. When she learned about the project, she was excited to bring her insights and experience to help fix a problem that frustrated her and so many of her fellow Olympians, Gray says.

“In order to build a brand that was not limited just to improving athletic performance, they reached out to Cindy Crawford, who is known for her balanced approach to health," Gray says.

Instead of magic pills and one-size-fits-all fads, Ladder is built on three pillars: scientifically backed information, community interaction with experts, and customized nutrition products, he adds.