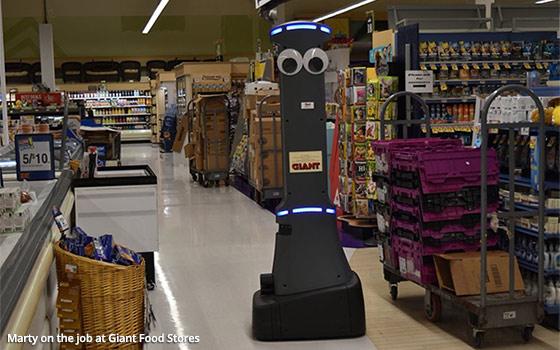 Grocery shoppers are about to come face-to-face with hordes of new robots in the aisles in stores across the country.

These robots perform various functions ranging from monitoring inventory to cleaning the floors.

About 500 in-store robots named Marty are coming to neighborhood grocery stores in the Ahold Delhaize U.S. brands Stop & Shop and Giant/Martin’s. That rollout is from a partnership between Retail Busines Services, the services company of Ahold, and Badger Technologies, a product division of Jabil.

The in-store robots, being deployed now, are to be used to identify hazards, such as liquid, powder and bulk food item spills. However, Marty will not be the only robot in stores.

In October, Walmart introduced a self-driving machine to clean and polish floors. The Auto-C (autonomous cleaner) uses assisted autonomy to clean floors rather than an employee riding on and driving the scrub machine. That machine started in 78 Walmart stores on its way to 360 locations.

At the National Retail Federation Big Show earlier this week, a retail robot from Fellow Robots was demonstrated. That robot is already roaming the aisles at Lowe’s stores as it monitors inventory there. Lowe’s Innovation Labs had already worked with Fellow to develop LoweBot, which could find products for customers in multiple languages and help customers navigate the store.

While the LoweBot would lead the way for a consumer to find a product, others are working on robots to follow shoppers. LG Electronics and South Korean discount chain operator E-mart are working on developing a smart shopping cart that can follow a shopper in a store. The retailer earlier introduced "Eli," the test autonomous shopping cart.

While there are plenty of robots working behind the scenes, like those at Amazon’s warehouses and the Ocado robots in the works for some 20 Kroger warehouses, the more visible robotic activity will be in the store.

The robots are suiting up for retail.