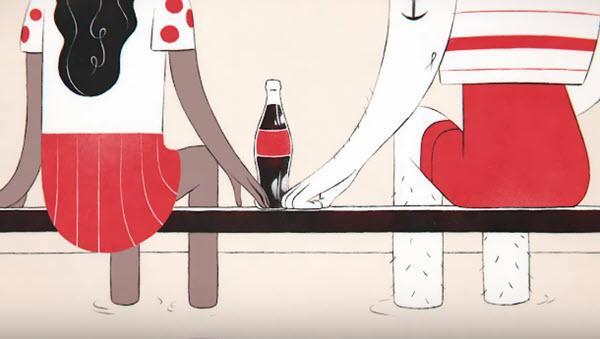 Coca-Cola has released its 60-second Super Bowl LIII ad, set to air during the pregame telecast, before the national anthem.

The ad, created by Wieden + Kennedy and animated by Psyop, seeks to remind viewers that both differences and togetherness “are beautiful.”

This is Coke's 12th consecutive Super Bowl ad, but its first to air pregame, rather than in-game. The brand is positioning the decision to air before the anthem — in recent times a source of divisiveness between supporters and critics of NFL players who have knelt during the anthem in protest against police violence against minorities — as a messaging strategy.

“The Big Game is such a great opportunity for America to come together, and for us to articulate what  is all about,” said Jennifer Healan, group director, integrated marketing content,  North America.

Pregame ad slots are also much less costly than in-game ones (this year averaging around $5 million), running anywhere from hundreds of thousands to a few million dollars, depending on proximity to the kick-off, points out Variety.

The spot, titled “A Coke is a Coke,” was inspired by quotes from pop-art master Andy Warhol: “What’s great about this country is that America started the tradition where the richest consumers buy essentially the same thing as the poorest. You can be watching TV and see , and you know that the President drinks Coke, Liz Taylor drinks Coke, and, just think, you can drink Coke, too. A Coke is a Coke, and no amount of money can get you a better Coke than the one the bum on the corner is drinking." Warhol also said, "Different is beautiful. And together is beautiful, too."

“Every image, word and voice featured in the spot is meant to bring people together — regardless of race, gender, origin, religion, profession, lifestyle or point of view — and celebrate their differences over an ice-cold Coke,” sums up the Coca-Cola Journey blog.

"The timeless message of the spot is especially relevant today given what’s happening in society, and we hope it will resonate with viewers as they come together as a country to sing our national anthem,” Brynn Bardacke, vice president, content and creative excellence,  North America, explained in Journey.

In conjunction with the ad, Coca-Cola will invite fans to share a “Together is Beautiful” message by sending selfies “celebrating what makes them both different and beautiful.”

The brand’s Instagram channel will feature a mural made up of images similar in style to the ad’s, and the brand will respond to Twitter followers with positive messages from characters in the ad.

With this year’s game taking place this year in Atlanta, the parent company's headquarters city, The Coca-Cola Foundation has also announced a $1 million grant dedicated to allowing free admission for anyone visiting the city’s National Center for Civil and Human Rights from Jan. 28 through the end of February, Black History Month.