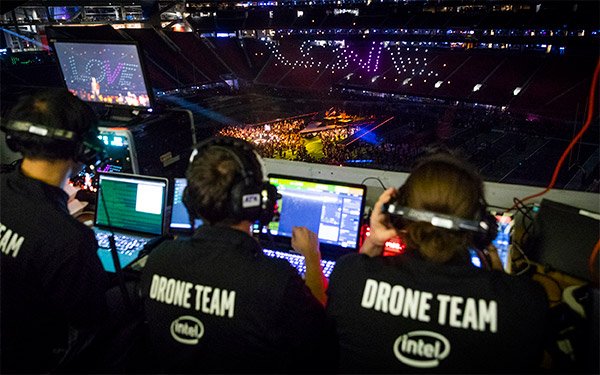 As Maroon 5 sang “She Will Be Loved,” the drones floated up and over the field, choreographed to form the words “One” and “Love.” The drones were made to look like floating lanterns.

The drones were enabled to fly a pre-programmed path in the closed stadium without the use of GPS, according to Intel, which stated that the 150 drones flown indoors exceeded the world record that Intel set by flying 110 indoor drones at CES in 2018.

“Our team constantly looks for opportunities to push the boundaries of innovation and deliver stunning entertainment experiences with our drone technology,” stated Anil Nanduri, Intel vice president and general manager of the Intel Drone Group. “We collaborated with the show producers, both creatively and technically, to bring a special show experience to the viewers.”

Intel also created a short video of the Shooting Star drones used at the Super Bowl.