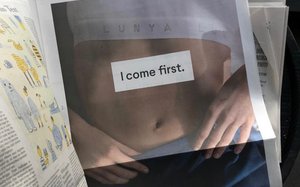 Lunya, the women’s sleepwear brand, spends a lot of time in women’s bedrooms. And it wants the world to know there just aren’t enough orgasms.

So the company launched “I come first” with a full-page ad in the New York Times, a mural on its Los Angeles headquarters and out-of-home ads in New York and San Francisco.

Founder and CEO Ashley Merrill says she is making women’s pleasure part of its brand mission as a natural next step in the #MeToo movement. “We are suddenly reevaluating gender dynamics in every context,” she says. “And since we’re looking at everything with fresh eyes, I’d like this issue to be part of the conversation, too.”

She says the campaign is based on research that shows 75% of women don’t orgasm during sexual intercourse, and that just 38% of women say they’ve masturbated in the past year.

More troubling is that 30% of women say sex is painful and that, on average, they wait up to 10 years before telling a doctor that sex hurts, she tells Marketing Daily.

“I just kept thinking, 'Why have we accepted this? Why is this OK?’”

She says her brand is a good fit for climactic conversations because it’s emphatically not a lingerie brand, but one that strives to connect with women on a more intimate level. “Lingerie is very much about looking at women from a male gaze, with lace and ties so you look like a present to be unwrapped,” she says. “There’s nothing wrong with that, but our product is actually for sleeping, for comfort.”

The company’s sleepwear, much of it priced in the $180 range, tends to a very quiet color palette, for example, with few bright colors. “We want our products to feel effortless, and there is something easy about putting on neutrals,” she says.

She says the campaign fits into the young brand’s broader mission, too. While primarily an online company, it has stores in Los Angeles and New York. To engage customers, it also links to women’s causes, including Girls Inc. and breast-cancer awareness. And it hosts events, like a bi-partisan debate before the midterm elections.

She’s hoping women, “who have a long history of coming second,” will start to see orgasms as part of self-care.

Merrill, who declined to reveal the cost of the new ads, says she hopes to do for sleepwear what Lululemon has done for activewear. And she says she is not looking for any hard-and-fast metric to see if the campaign is successful.

“Again, I think this is similar to the #MeToo movement,” she says. While no one may be able to quantify how many people are talking about it, “it’s having ramifications. You can feel its impact.”