Companies Can Forget About Gen Z This Valentine's Day 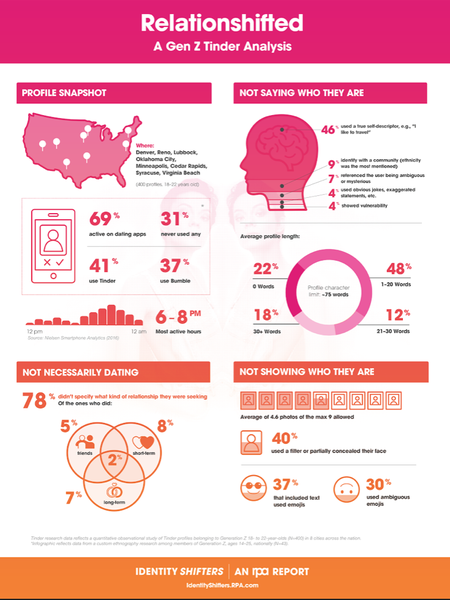 Gen Zers are going to be lonely on Valentine’s Day, and it’s their own fault, according to a study by RPA.

Analyzing the Tinder profile data of more than 400 18- to 22-year-olds across the country revealed several key insights on this generation.

First, Gen Zers rely on ambiguity. They dodge identity labels in their typically short bios — in fact, 22% of bios were left completely blank — and avoid using any “real” self-descriptors (such as “I like to travel.”). They use few photos and prefer emojis, particularly vague ones, to draw interest through mystery — and, perhaps, to not look like they are trying too hard, according to the report.

This generation avoids being vulnerable or giving revealing statements — 40% “masked” their faces, either through a filter or by partially concealing their faces. They avoid saying what kind of relationship they are looking for. As one respondent said, “It’s really just a game.”

And they are vague about their identities: Just 9% of profiles referenced a community identity (ethnicity, religion, diet, politics, etc.).

This research is part of a bigger report on Gen Z, “The Identify Shifters: A Gen Z Exploration,” produced by RPA. The analysis shows a generation that is going through a profound shift in their identity, where context is king, and the audience determines the self — and dating is no exception, according to the agency.