'Blockchain' Most Overrated, 'Transparency' Most Important Words Of The Year 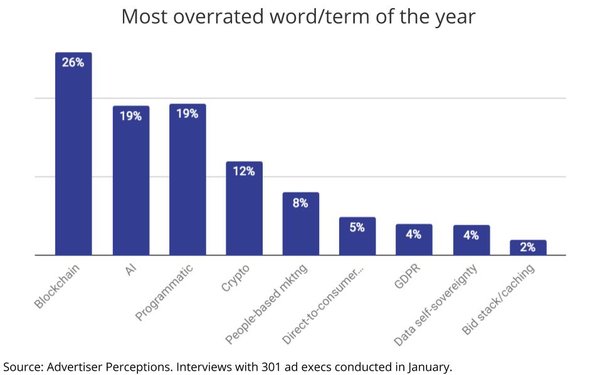 Blockchain consumed a disproportionate share of industry conversations in 2018, which may be one of the reasons it was also named the most overrated word of the year by ad execs surveyed by Advertiser Perceptions for MediaPost’s Research Intelligencer.

Full details of the findings, including predictions of 2019’s words or terms of the year, can be found in today’s edition of Research Intelligencer, which fielded the survey following the Association of National Advertisers’ release of its annual word/s of the year -- “brand purpose” -- in order to measure how the rest of the industry thinks, including ad agencies, and also to find out what words or terms have been given too much weight.

Advertisers (31%) were half again as likely to feel “blockchain” is overrated than agencies (22%), according to the study, which interviewed 120 marketers and 181 agency executives in January.

The second most overrated word of 2018 was a tie between “AI” and “programmatic,” with a “crypto” a close third. “People-based marketing” came up fourth. Detailed rankings and agency/client splits, as well as all the other datasets from this study available in today’s Research Intelligencer.

The most important word of the year, according to our study, was “transparency,” which was also a runner-up to “people-based marketing” among the ANA respondents, and was also their word of the year for 2016.

“Influencer,” another runner-up in this year’s ANA poll, ranked second in the Research Intelligencer’s.

“Brand purpose” ranked fourth in our survey, just behind “AI.”

blockchain, digital, research
2 comments about "'Blockchain' Most Overrated, 'Transparency' Most Important Words Of The Year".
Check to receive email when comments are posted.
Read more comments >
Next story loading