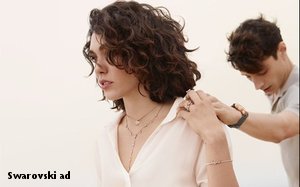 Fed up with what feels like the over-commercialization of love, American consumers have been cooling on Valentine’s Day gift-giving, and it looks like the jewelry business is feeling the chill.

The National Retail Federation says that just half of all people 55 and under intend to celebrate this year, compared with 72% back in 2009. A poll it commissioned to explore the decline in 2017 found that the main reasons people say they’re less enthusiastic are that they feel it’s over-commercialized, they didn’t have a sweetie to celebrate with or they just aren’t into it.

In particular, jewelry is feeling the pinch. This year, the NRF’s research finds that 18% of people celebrating will buy some bling, spending $3.9 billion. In 2015, 21% said they’d do so, spending $4.8 billion.

And an analysis from Cubeiq, which tracks foot traffic to stores using anonymous and aggregated mobility patterns, is also showing a marked decline, with just half a million visits to leading jewelry stores the Saturday before Valentine’s Day last year. Its analysis includes Kay Jewelers, Helzberg Diamonds, Swarovski, Jared the Galleria of Jewelry, Zales Jewelers and Pandora.

“Perhaps recently, some consumers are finding traditional Valentine’s Day gifts a bit cliché,” says Valentina Marastoni-Bieser, Cuebiq’s senior vice president of marketing. But she tells Marketing Daily there may be a variety of reasons for reduced bling-buying including shifting spending habits and the rise of online shopping.

And despite this new February reluctance, jewelry sales have been relatively healthy. Euromonitor reports that U.S. consumers spent $70.67 billion in 2018 on real and costume jewelry, up from $61.06 billion in 2013, growing annually at about 3%.

Cubeiq also says some retail brands have stronger appeal. Jared, for instance, is weaker, with 84% of those tracked visiting the store just once. Yet at Kay, 27% visited at least twice. And Swarovski is winning on customer engagement, with a fifth of its shoppers spending at least 55 minutes in the store.