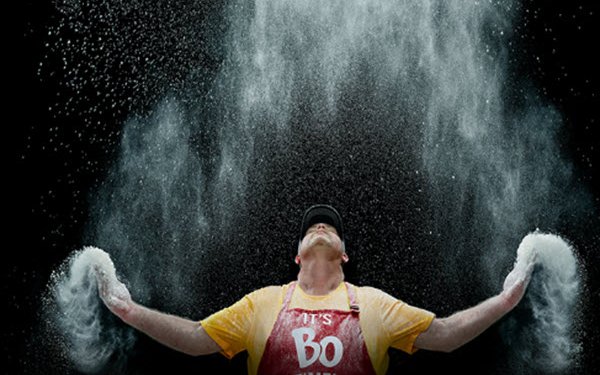 Bojangles’ -- whose 750-plus locations are mostly in the Southeast -- is playfully referencing the “chalk toss” pregame ritual popularized by Lebron James, and the flour that’s the key ingredient in its own signature biscuits.

The brand has installed an impossible-to-ignore billboard in uptown Charlotte. The installation features a huge image of one of its actual “Master Biscuit Makers” tossing flour in the air, and actually sprays simulated flour into the air periodically, as a reminder that Bojangles’ makes from-scratch biscuits every 20 minutes.

During the All-Star Weekend, Bojangles’ is also encouraging fans to upload photos into flour-tossing frames provided at www.BiscuitBaller.com and post them on social media, using #BiscuitBaller and #Sweepstakes, for chances to win prizes such as Bojangles’ gift cards, an Xbox One S, the game NBA 2K19, and a live demonstration by a Master Biscuit Maker.

Bojangles’ worked with Charlotte-based advertising and PR agency LGA on the promotion.

Meanwhile, in a far-from-obvious connection, Red Lobster fans also tend to be NBA fans, according to research from Google and Spark.

That inspired the brand to play on the All-Star Weekend’s Slam Dunk Contest with “Butter Dunks” feeds on social media.

Each time a player makes a dunk, Red Lobster “seafood experts” will respond in real time, on Twitter, with a butter dunk, such as a “two-handed jam” or “mid-air spear.”

Fans can find Red Lobster’s dunks on Twitter by following @RedLobster and #ButterDunks during the Slam Dunk Contest on the evening of Feb. 16.

Not surprisingly, the brand is also encouraging fans to order Red Lobster to eat while they watch the slam and butter dunks. (Or they can head to one of its locations -- where the chain’s LobsterFest promotion is underway -- before or after the dunks.)