InnovAsian Goes For Recall -- And Share -- With Funny TV Ads 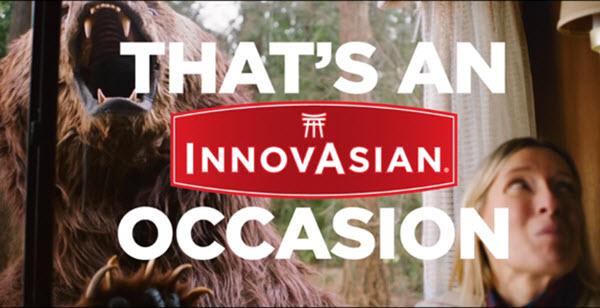 While many marketers of frozen Asian food emphasize their products' bold, exotic flavors, InnovAsian and new agency of record Duncan Channon are taking a different tack: using humor to reach a mass audience.

The brand is frankly looking to go after some of P.F. Chang’s market share, with added momentum from an upswing in frozen food sales. The category grew 2.3% last year, outpacing total-store and fresh growth, per a new report from the American Frozen Food Institute and Food Marketing Institute. In addition, Euromonitor data shows that 76% of Americans eat Chinese food every month.

The campaign, featuring four new 15-second TV spots, shows various “InnovAsian Occasions” — the idea being that that there are many times when getting an Asian food fix in minutes is the ultimate comfort.

Each ad depicts a frustrating or stressful situation, with voiceover and on-screen messaging that rhymes with the tagline.

One ad shows a family trying to grin and pretend that a grizzly isn’t threatening them through the window of their camper (above). Message: “Rough start to your family vacation? That’s an InnovAsian Occasion.”

The other vignettes include surviving a potential alien invasion, suffering hours of co-worker aggravation, and recovering from a bachelor celebration.

“Our customers are living perfectly imperfect lives with stresses, joys and surprises that make it convenient and comforting to have InnovAsian’s Chinese meals on hand in the freezer,” said Debbie McCurdy, VP of Marketing and Innovation, InnovAsian.

The ads will run on social media as well as air on TV in 20 markets. To reinforce the rhyming message and drive recall, two of the spots will run during the same television commercial break, separated by other marketers’ ads.

“The idea behind this campaign is simple: Let’s teach America the name InnovAsian so they remember and reach for it in the freezer aisle,” sums up John Kovacevich, executive creative director, Duncan Channon.