Oscar Hosting Is So Complicated, No One Wants To Do It 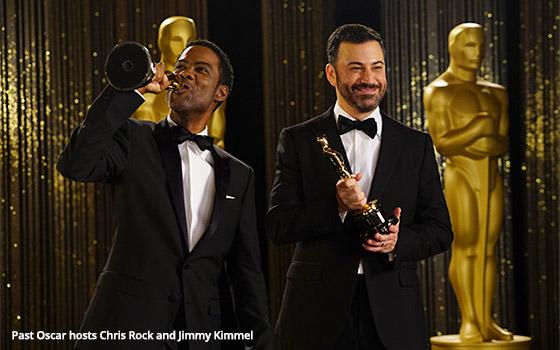 How did something so simple become so complicated?

When it comes to the Academy Awards and the annual designation of a host, the answer is: This is the world we live in. Simply put (and admittedly over-generalizing), we have made a complicated world for ourselves.

It is so complicated that this Sunday night's Oscars on ABC will be the first in 30 years without a host.

It used to be a no-brainer. You went out and got an A-list entertainer who was inoffensive to most people -- and possibly even liked by them. This person was also generally well-liked within the Hollywood community too.

Then, when invited to host the show, this host-prospect usually said yes because the Oscars promised huge exposure. There was a certain logic to it.

Once upon a time, entertainers sought the biggest audiences they could find. That was their goal. This is what the Oscars offered.

Today, however, celebrities won't touch the Oscar hosting job with a 10-foot pole. Why? Because accepting this job is like asking for trouble.

Plus, no celebrity today would seem to have the stature that is necessary and appropriate for the job. This is because no one today has what used to be known as mass appeal. Or to put it another way, Bob Hope hosted the Oscars 19 times. Today, we do not seem to have any more Bob Hopes.

Billy Crystal came closest. He hosted the Oscars nine times. But even he reportedly turns it down routinely now, possibly because it just feels old-hat to him or because the job has become so thankless.

Even Crystal, who was the best-liked Oscar host in the last 25 years or so, found himself mired in controversy after his last hosting stint in 2012. During that show, he appeared in costume as Sammy Davis Jr., an impersonation he began doing in the 1980s on “Saturday Night Live.”

This ludicrous caricature required that Crystal darken his face with makeup. This led to criticism that Crystal was donning “blackface” as if he were headlining a minstrel show. The truth was, Sammy himself blessed this impersonation while he was still alive in the 1980s. And he and Crystal were close friends.

So if Sammy Davis himself didn't care, why should anyone else? But that is not the world we live in today.

Today, the minute a prominent entertainer is named to host the Oscars, vigilantes assign themselves the task of combing through Google and social media to learn what the designee has said or done that ought to disqualify him or her from the job, according to these self-appointed judges and juries.

This is what happened to Kevin Hart. No sooner was he named to be this year's Oscar host than comments he posted on Twitter as far back as 2009 were unearthed that were interpreted by many as homophobic. And maybe they were at the time.

In the wake of these discoveries, Hart tried to apologize. He tried to persuade the angry parties that he has matured and changed in his views about many things since then. Even Ellen DeGeneres flew to his defense. But the damage was done. Kevin Hart would not be permitted to achieve this career pinnacle, which is what the Oscar-hosting gig used to represent in show business.

Jimmy Kimmel was the host for the last two Oscars, which made a certain amount of sense because he is ABC's guy. Chris Rock (pictured above with Kimmel) was the host the year before that, in 2016. Ellen DeGeneres has hosted the Oscars. So have Jon Stewart, Steve Martin, Whoopi Goldberg, Neil Patrick Harris and Seth MacFarlane.

Maybe the lack of a host this year comes down to a very simple fact: There is simply no one left. They have either tried or asked everybody. And it has come to this: no one wants a job that used to be one of the top assignments an entertainer could get in his or her lifetime.

What has happened to what we used to call show business?