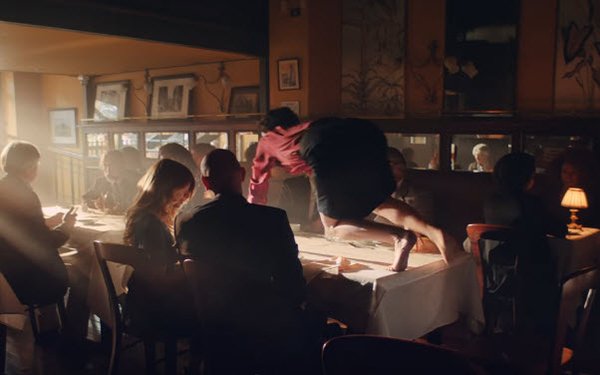 For Oscars Sunday, Michelob Ultra Pure Gold and FCB Chicago have come up with an ad that manages to be more over-the-top than its extremely trendy, ASMR-mode Super Bowl LIII ad featuring Zoe Kravitz.

The new 60-second ad (below) -- which will have its broadcast debut during the Academy Awards’ pre-show red carpet coverage -- was inspired by a fitness trend called Animal Flow, which combines animal-like “quadrupedal and ground-based movements” with bodyweight-training elements.

The “Call from Nature” creative takes the fad to its logical extreme, by imagining fit young adults being seized with irresistible urges to crawl across a restaurant dinner table (above), charge on all fours down city streets, and take flight between skyscrapers. With their animal natures released from day-to-day constraints, they form a herd that converges in a remote, mountainous region (in Chile, according to a spokesperson).

After a screen title urging viewers to “return to nature,” the new ad, like the Kravitz ad, ends with a product shot accompanied by “beer in its organic form” and a prominent display of the USDA Certified Organic stamp.

The new ad aims to “continue the momentum” of the campaign launched with the Super Bowl ad, confirms Azania Andrews, VP for Michelob Ultra.