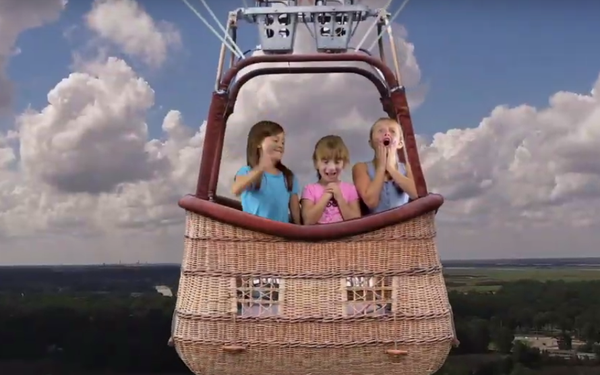 YouTube has done a pretty good job letting everyone find a way to create their own entertainment pieces. The Google-owned site says an incredible 300 hours of video are uploaded every minute.

Now, DropKey, a so-called Silicon Beach start-up in Los Angeles would like to make those homegrown videos look better.

It’s marketing the DropKey app and Studio in a Bag, a portable, inflatable “green screen” Chroma key background kit  Used together, the app and the “set”  can help produce an HD video from a smartphone -- anywhere -- that’s good enough to rival a professional ad agency’s commercials,.

He says, “There already are kits on Amazon that cost about $175” -- but they turn out badly, with lots of shadows and other problems.

Studio in a Bag and DropKey cost $999, a pricey piece of equipment for novices, but probably in the ballpark for starting-out bands, vloggers and influencers — or, Scharer allows, the parents who support them.

Like  the green screen (sometimes blue) that TV weathercasters use to show you the entire tristate region, Studio in a Bag can conjure up a scary alley or the Grand Canyon. To drive the point home, DropKey has trademark-registered “Be Anywhere” — which is what that green screen can fake. It has other patents pending.

Studio in a Bag can be up and running in 10 minutes, and the background folds up and stows away in a long satchel that can easily be checked as what airlines call a “hockey bag,” about four feet long and weighing under 50 pounds.

Lighting and sound arrangements are part of the package.. The system syncs with the DropKey app, to provide an array of scene choices, and wirelessly helps adjust light and sound.

“We’re going to consumerize Chroma-key.We’re democratizing it,” Scharer says. He developed the idea with Richard Mall, an Oscar winner for  for his camera and technical work on “Avatar” and the second and third “Iron Man” films.

This year, DropKey and Studio in a Bag are finalists for a 2019 Edison Award given to innovators. To date, the company has received seed funding of over $1 million from East Coast Ventures, with more funding tantalizingly close, Scharer says

But isn’t part of the charm of YouTube and other social media video its raw amateur look? “No. I think it’s just the opposite,” Scharer asserts.

And while the stereotype image of YouTube might be a kind of “Wayne’s World” production, social media video is really big business now.  After all, some people make a living from it.