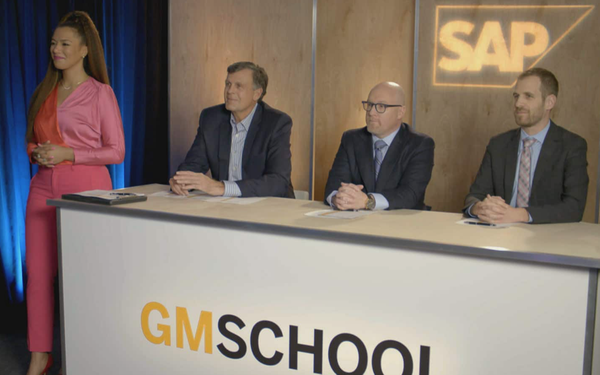 The NBA hosted a reality competition show that pitted four data-hungry basketball fans against each other to see who had what it takes to be a general manager in the association.

Created by SAP (the NBA’s data analytics partner) “GM School” aired for the first-time last recently on NBA TV and can be viewed on YouTube.

Sports fans have discovered the entertainment value of studying data, so SAP and the NBA decided to challenge the new generation of stat-minded fans to translate their knowledge into a winning formula as a GM of a fictitious NBA team.

“We’re constantly looking for new ways to engage and connect with NBA fans around the world, with the help of our partners,” stated Kerry Tatlock, senior vice president and head of marketing partnerships at the NBA. “SAP’s ’GM School’ offered fans a unique behind-the-scenes look at how technology plays a key role and the skills required to succeed in today’s NBA front offices.”

From participating in a mock post-game press conference, to drafting franchise building blocks and selecting a starting five lineup, the contestants competed in challenges under an all-star panel of judges, including Kevin McHale (Hall of Famer and former coach/GM), David Griffin (former GM) and the NBA’s senior vice president of basketball strategy and analytics, Evan Wasch.

The winner of the competition is Matthew Ellis, an MBA candidate at Columbia Business School. He will receive an exploratory interview with the NBA as well as meetings with league executives, with the hope of one day working in an NBA front office.

The competitors aren’t the only fans hungry for stats. Engagement with NBA.com/stats is growing exponentially, with more than 73 million page views in the 2017-2018 NBA season, which is +5% than the  2016-2017 season, according to SAP (which stands for systems, applications and products in data processing).

Introduced in 2013, NBA.com/stats deliverers stats and insights to fans in real time, including the league’s entire statistical history. Since 2013, it has garnered more than 300 million page views.