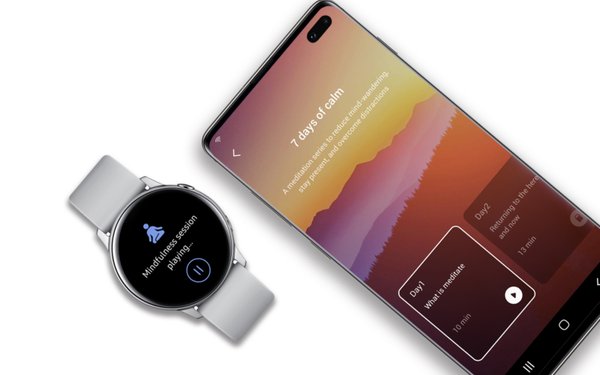 The average smartphone user checks messages 80 times a day -- every 12 minutes -- according to global tech protection and support company Asurion.

You might conclude that, for their own sanity, those people should just chill, somehow.

Here’s a way to get to that somehow" Samsung just announced it’s partnering with Calm, “the number 1 app for sleep, meditation and relaxation,”  to give users quick  access to the service via the Samsung Health app.

That app has 60 million active users, and works across lots of Samsung and third-party devices.

Calm was Apple’s 2017 iPhone App of the Year and makes the list as Inc.’s 19th fastest-growing company. It's had 43 million downloads, averaging 100,000 new users daily, the company claims.

The app features over 100 guided meditations, 10-minute long stretching exercises to release tension, hundreds of hours of music to sleep, relax or focus by, and a library of "Sleep Stories."

A  10-minute meditation, “The Daily Calm,” delves into a new “mindful” theme every day.

Calm costs $59.99 a year but comes free via Samsung Health. A Samsung press representative said the Samsung version is “a lot of” of what the for-pay version presents — but not the full boatload that a paid subscription would enable.

At first, the Calm integration will be available with Samsung smartphones running Android Pie OS, including the new Galaxy S10 line, in 10 markets, including the United States. It’s also available to Galaxy Watch users.

“Our work with Calm is going to make it easier than ever for Samsung Health users to practice mindfulness, so they can work toward achieving better overall health,” said Peter Koo, corporate senior vice president and head of the health service mobile communications team.

Some research says four in 10 adults in the United States meditate at least weekly, and big companies now offer meditation services to their employees. According to Sage Business Researcher, the meditation industry generated $1.2 billion in revenue last year.

Calm is one of the leaders in the business, but new meditation apps are popping up all the time  Calm was founded in 2012 by entrepreneur Alex Tew and Michael Acton Smith, whose previous claim to fame was the crazily popular video game Mind Candy.

Many businesses might attribute their recent good fortune to President Trump’s policies — but a 2017 CNBC interview attributed Calm’s success to the man himself.

“Donald Trump is not to everyone's taste, and he makes some people angry and frustrated," Acton Smith told the network. "Learning to be more mindful and relaxing and calming people has proved to be particularly popular this year."