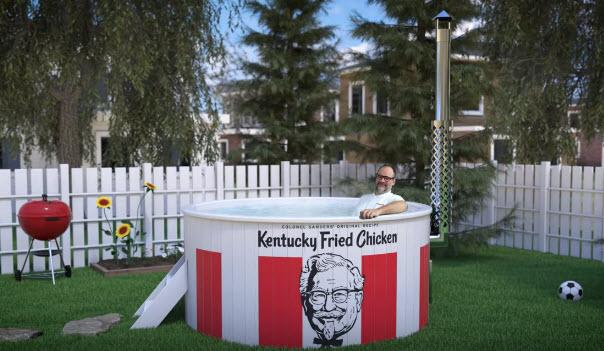 KFC isn’t the first company to use a crowdfunding platform to support and gauge interest in new product or technology ideas, but its inventions are likely the most off-the-wall.

The chicken QSR has launched a “KFC Innovations Lab” on Indiegogo to solicit contributions to “bring more of the company’s craziest and most innovative ideas to life.”

KFC has posted a video on YouTube (below), Twitter and other social media explaining the concept and the initial ideas being pitched.

The company says that if a project becomes fully funded, it will work with inventors to start production. It will also distribute branded items being offered as perks for those contributing specific amounts, including 3D puffy sticker packs, T-shirts and sweatpants. If a project fails to reach its funding target, all contributions will be refunded to individual supporters.

KFC — which has become known for promoting limited-edition items like the Colonel Sanders Floatie, the Colonel Sanders Cat Climber, and a KFC 11 Herbs & Spices Firelog — certainly stands to generate more social media buzz and engagement with the crowdfunding push.

But the brand insists that, while the ideas are funky, its innovations lab is no joke.

The campaign FAQ copy stresses that KFC started the crowdfunding efforts “to bring people into the process of selecting and supporting new ideas, so they can be a part of the process and we can keep focusing our business on making the world’s best fried chicken… We’ve based the prices of the items and perks at the total cost to produce the items, including any prototype costs. None of these funds will go into the Colonel’s pocket or directly to KFC.”