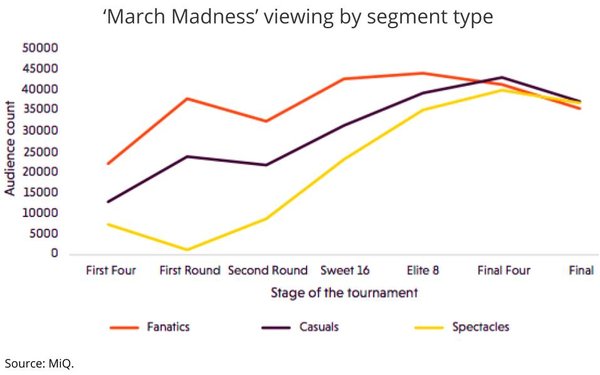 In what may be one of the most in-depth analyses to date of the magnitude and composition of the NCAA college basketball tournament, independent marketing intelligence firm MiQ has just published a "March Madness" report segmenting the live sporting event's audience into three distinct types -- "Fanatics," "Casuals" and "Spectacles" all of whom's interest is relatively strong and builds over the course of the single elimination tournament beginning March 19.

As March 17th's "Selection Sunday" nears, the report notes the average American will spend six hours watching the games at work, and "more than $10 billion will be wagered on games.

"For advertisers, March Madness represents an enormous opportunity to reach a highly-engaged audience across multiple channels and platforms."

With TV ad spending on networks carrying the event expected to exceed $1 billion, the MiQ report marvels at how much the franchise has grown from its apocryphal roots fueled by fan-based wagering that supposedly began with 80 people in a bar in Staten Island, New York, creating a pool in 1977.

Even as regulators ease legal wagering on other sports properties, the MiQ report implies how side-betting has fueled interest from people who otherwise might not follow college basketball, noting that the average American worker will spend six hours in their office (25.5 minutes per day) monitoring the event.

In terms of the audience segments, MiQ characterizes them this way:

The largest segment of March Madness viewers, making up 55% of its TV audience, they are there purely for the spectacle of it. Most Spectacles (63%) will watch only one or two games during the tournament, typically during the later rounds. On average, they’ll watch four games during the entire event, averaging 40 minutes of viewing time. They have the least loyalty to a local team. Unlike Fanatics and Casuals, Spectacles are equally likely to be women as men, and includes a disproportionate segment of older viewers (55+).

The heavies viewers of March Madness content, Casuals also likely to watch the NBA playoffs and other basketball-related content on TV. They account for 31% of the March Madness viewing audience, and tend to watch an average of 15 games during the event. They are primarily men between the ages of 35 and 44 and over-index to employment in finance or marketing-related fields. They tend to watch more news content on TV (such as CNN or FOX news), averaging 37 minutes per day. They’re also likely to be fans of other sports, with just under a third also watching NFL football. Casuals are also likely to be following a specific team as they watch games, usually the team local to their geographic region. 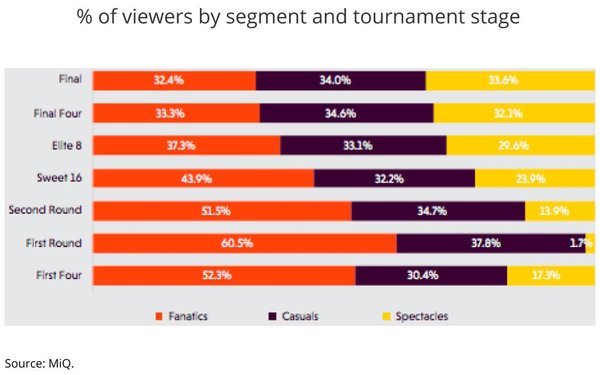