Manscaped Goes Where Few Grooming Products Have Gone Before: Below The Belt 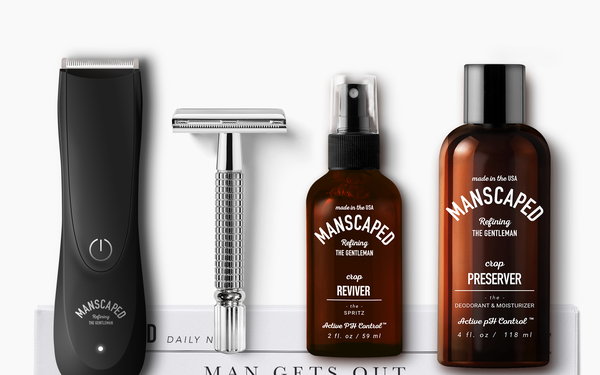 The popularity of men’s grooming products businesses like Harry’s Shave Club,  the Men’s Shaving Club  and other subscriber retail products have perked up the category in the last few years.

A San Diego company called Manscaped Inc is cutting a new path for men’s grooming products by concentrating on the male area that once would have been unmentionable in polite company.

To put it a little more plainly: When co-founder Steve King and his son Josh made their successful product pitch on “Shark Tank,” Steve King referred to Manscaped  "as the first brand to address men's below-the-belt grooming and hygiene.”

It seems that area of a man’s body hasn’t gotten much marketing attention. Though there are plenty of men’s beard and body trimmers on the market, when New York magazine’s online vertical The Strategist  compiled its list of "The Best Manscaping Tools," it chose several men’s shavers but picked the Manscaped Lawn Mower 2.0 as the “best groin trimmer,” crediting its thin blades that don’t pull or yank at hairs in the pubic area.

There really don’t seem to be any other trimmer that so bluntly states its purpose.

“We think we’ve really carved out a niche product,” says co-founder Paul Tran. “When we started [in 2017], we asked ourselves, ‘Are men ready for it?’”

What the company  — quickly — discovered is that some men were just waiting for a product like that to be available. Manscaped had seven figure revenues the first year, eight figures in 2018 and expects nine figures by the end of this year.

It advertises heavily on social media, Tran says. Many of Manscaped’s YouTube videos contain endearing euphemisms for the male pubic area — like “the zone below” — which has rarely, if ever been addressed by specific mass market products.

“Women have been used to this for years. But men want to feel confident, too, really, when they pull their pants down,” Tran says.

The Perfect Package 2.0 + Peak Hygiene Plan costs $74.99 to new members. It features  The Lawn Mower 2.0, an electric trimmer; The Plow, a safety razor; the Crop Preserver, an  “anti-chafing ball deodorant”; the Crop Reviver, a toner and refresher for "highly sensitive" body areas; and three disposable shaving mats. Every three months, Manscaped sends out new trimmer blades for  $14.95 unless you tell them to stop.

Tran says the Crop Preserver has been a surprise hit. “Men don’t want to use talcum powder. This really works. We hear from marathon runners, cyclists. It’s very popular.”

Pitches for the product are mostly funny, in a appropriately jock-ish kind of way. In one video, the trimmer is called “the best ball-shaving trimmer on the planet.”

On “Shark Tank,” King and his son used the line that has become a kind of motto at Manscaped.  Working on a nearby houseplant, Josh showed the judges that The Lawn Mower could easily mow down the tall grass growing around the plant. “And when you trim the hedges” his father said, “the tree stands taller.”