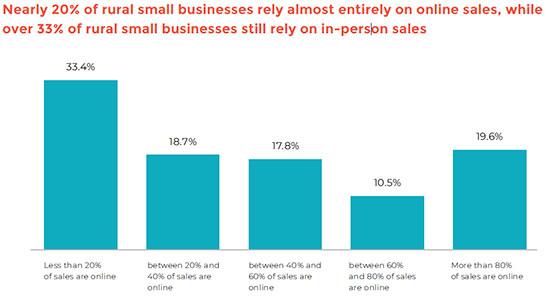 Amazon released a report on Wednesday conducted by the U.S. Chamber of Commerce that analyzes the potential of using digital tools across the rural United Sates.

The study finds that digital technology could help to add more than $140 billion to the U.S. economy during the next three years and could create an additional 360,000 full-time jobs in rural communities.

The report, based on a survey of 5,300 businesses in rural America, outlines a number of recommendations for the public and the private sectors to help unlock the unrealized economic potential of rural America.

I reached out to Amazon to determine how many of those 5,300 businesses sell on Amazon. A spokesperson said: "We don’t have this information available as businesses were selected by independent firm Ipsos based on their location, rural counties, and not whether or not they sell on Amazon."

The study found that adoption of digital technology could grow annual revenue of rural small businesses by 21% during the next three years -- about $84.5 billion per year -- with states in the South seeing the greatest benefit.

The findings also suggest that online tools and technology have the highest potential impact on rural small businesses with annual revenue under $100,000.

And while I agree with most of the findings in the comprehensive study, there are many misconceptions about living in rural America. For starters, similar to other places throughout the U.S., but more so in rural-town living, some people are not interested in learning about or using technology.

Second, poor internet access in rural areas prevents people from using the tools. We paid a lot for great internet access, but some people just don't want to spend the money on faster speeds and more reliable service.

Businesses do not offer free WiFi access to patrons as they do in cities across Los Angeles, Manhattan and even Salt Lake City. It just doesn’t exist. Any internet access is accessed by the business themselves, many of which are based in homes or barns.

Time also becomes a factor. Most people in rural U.S. work more than one job, mainly because there aren’t enough people to employ and the jobs need to get done. Some electricians and grow and sell hay for horses and other cows. There are more jobs than people.

I have lived for the past year in Wyoming, where animals like deer, moose, antelope and elk out number human beings. Away from my home, I typically get AT&T cell reception, but cannot always read my emails.

It turns out the $140 billion Amazon could unlock is actually three times the whole economy of Wyoming, according to an Amazon spokesperson.

It’s apparent how technology, search advertising, and even having a website could improve the quality of life in the rural areas, but most business owners do not have the time or the resources to learn how to setup the hardware and the tools and then use them.

The Amazon-commissioned study estimates about 37 million working-age adults and 18 million households exist in the rural U.S., accounting for about 15% of the adult population and nearly three-quarters of the country’s land mass. But annual revenue of rural businesses represent only 3.7% of total gross revenue in the U.S. economy.

In the mountain states, for example, such as Arizona, Colorado, Idaho, Montana, Nevada, New Mexico, Utah and Wyoming the research suggests online tools and technology will add $5.9 billion in sales, bring in $3.4 billion in additional annual revenue, and create about 29,454 jobs.

Through the findings, Amazon estimates that through unrealized gains due to the lack of access to digital tools, annual wages in Wyoming could rise to $85.7 million based on $505.4 million in annual sales and 2,058 jobs.

Categorized as the mountain states, for example, such as Arizona, Colorado, Idaho, Montana, Nevada, New Mexico, Utah and Wyoming the research suggests online tools and technology will add $5.9 billion in sales, bring in $3.4 billion in additional annual revenue, and create about 29,454 jobs.

The study also suggests one-in-five rural businesses use digital technology. Nearly 20% of rural small businesses in America generate the vast majority of their revenue, at least 80%, by selling their products and services online.

Perhaps, but many businesses, in my experience, do not have a website. They sell their goods and services through posts on Facebook.

The Amazon study found technology boots rural business revenue. Business owners say adoption of digital technology is important for their future, with 55.2% of them agreeing that e-commerce helps them grow their customer base and a similar percentage, about 54.6%, confirming that online tools had a positive impact on their revenue in the past three years.

Online services help rural businesses reach customers out of state and overseas. Almost 40% of these small business owners say that digital technology has allowed them to sell beyond their state and 16% of them confirm they are selling internationally due to their access to digital tools. Thirty-three percent sell their products using their own websites, 12.7% use a third-party online sales site, and 35.7% use online marketing, including social media.