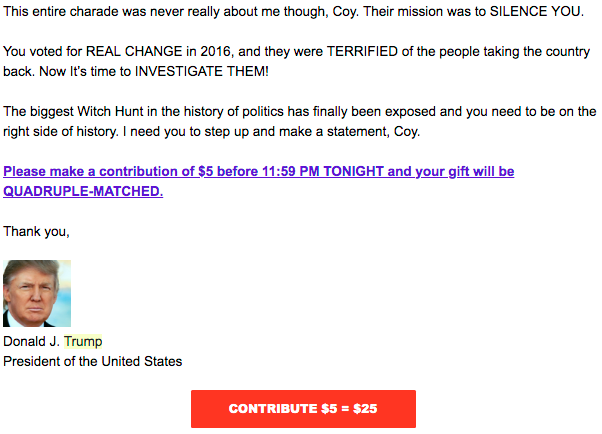 The Trump campaign has wasted no time in getting out fundraising emails hailing his “exoneration” by the Mueller report.

The subject line says "NO COLLUSION OR OBSTRUCTION," then asks for donation of $5 or more, according to reports.

Promising to quadruple-match any donations, the email seems to imply that the President will personally review the email donor list.

“My campaign will send me a list of everyone who donates at this critical moment,” it says. “I know I’ll see you on there, Friend.”

The email was sent after Sunday’s release of Attorney General Barr’s four-page synopsis of the long-awaited Mueller report.

The email and corresponding text messages were sent amid a report that says Republican operatives seek to prevent Trump from raiding the donor lists in GOP’s new fund-raising tool called WINRED.

The new tool is a small-dollar donation machine designed to match the “Democrats’ small-dollar juggernaut,” according to Yahoo News.

The brains behind the project say that donor and voter data will be safe against “poaching” by the Trump campaign.

However, traditional conservatives are concerned that Trump operatives will gain “backdoor access” to donors, the story continues.

Trump’s email has the headline: “WITCH HUNT INVESTIGATION CONCLUDED: NO COLLUSION OR OBSTRUCTION.”

One caustic observer tweeted: “Why do these always read like they were written by a Nigerian prince?”

However, the Trump fund-raising team has been successful in generating contributions from supporters.

The email reads as follows:

After more than 2 YEARS and $25 MILLION taxpayer dollars spent, the Mueller report proves what I have been saying since Day One: NO COLLUSION, NO OBSTRUCTION – COMPLETE EXONERATION.

Democrats worked with the Fake News Media for 2 years orchestrating this Nasty Witch Hunt to use our government as a weapon to take away the votes of 63 MILLION Americans.

After they lied to the American people, Nancy Pelosi, Democratic leadership and all of the 2019 Democratic candidates raised MILLIONS of dollars off of their phony Witch Hunt!

Democrats and the Fake News media have proven that there is no line they won’t cross, so we need to fight back BIGGER AND BETTER THAN EVER BEFORE.

That’s why I am activating a short-term QUADRUPLE MATCH for my best supporters only, the ones who stood by my side through the entire Witch Hunt.

My campaign will send me a list of everyone who donated at this critical moment. I know I’ll see you on there, Friend.

Please make a contribution of $5 before 11:59 TONIGHT and your gift will be QUADRUPLE-MATCHED.