Would You Click On A Bing Ads Action Extension? 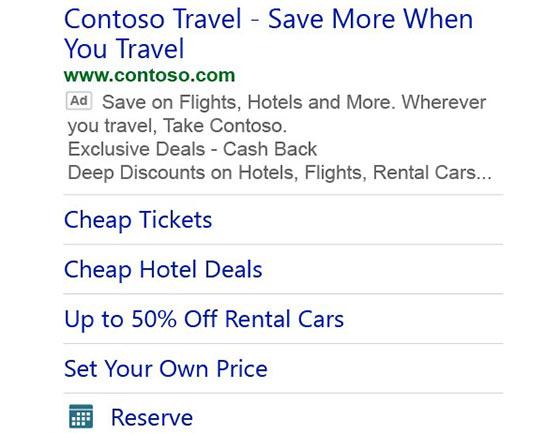 Bing Ads announced a new ad extension that allows marketers to highlight what they’re calling a “clear call-to-action” such as a “browse” or “reserve” button that appears in text ads.

Action Extension aims to entice customers to click on the ad that drives them to the brand’s website.

Advertisers participating in the beta saw average click-through-rates (CTRs) increase by 20% when they served the extensions in their ads. I’m not sure it would work for me. I typically see the ad and then go to the brand’s website to find out more information. Then I make the purchase.

On the desktop, action extensions appear as a clickable button to the right of the ad copy. On mobile, the action extension appears with a related icon below the ad, but it also can display below other extensions such as sitelinks.

Akshaya Pragadeeshram, program manager at Bing Ads, and Eugene Goldenshteyn, senior product marketing manager at Bing Ads, ran through some of the key points in a joint post. They wrote that similar to sitelinks, clicks on Action Extensions will be charged the same as a cost-per-click (CPC) on the ad headline.

They also can serve up with other ad extensions like sitelinks, and can be associated at the account, campaign, or ad group level, where the lowest level takes precedence. There is a limit of 20 associations per level.

It’s also important to note that the URL fields are all optional. If the URL is not provided for the Action Extension, Bing will use the ad’s URLs, or the URL at the keyword level, if provided, as the landing page when the call-to-action button is clicked.