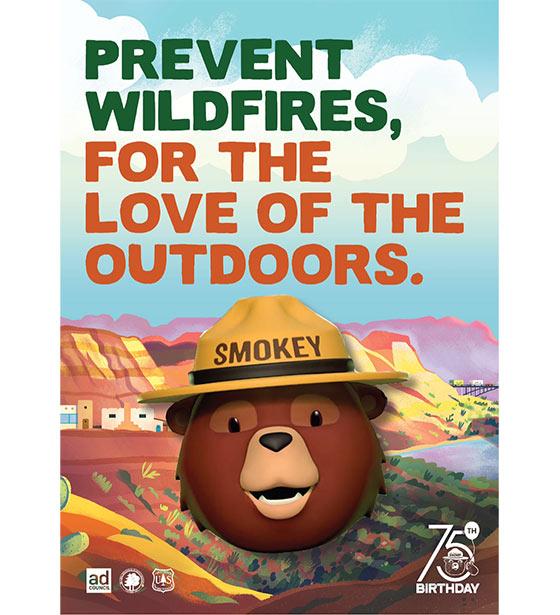 For years, through the voice of actor Sam Elliott, Smokey Bear only said five words: “Only you can prevent wildfires,” but the iconic spokes-bear is receiving help from celebrities to expand his fire safety and wildfire prevention message.

An new PSA campaign, developed with the U.S. Forest Service, the National Association of State Foresters, the Ad Council, and Interpublic’s FCB, is introducing ads that incorporate the voices of celebrities Stephen Colbert, Al Roker and Jeff Foxworthy with the CGI-animated Smokey to further address fire dangers like burning yard debris.

Foxworthy, to that end, riffs on his famous "you might be a redneck" joke, Roker mentions his well-known catchphrase "your neck of the woods," while Colbert plays off his last name—“Col-Bear.”

In addition to keeping Smokey "fresh" after 75 years, these expanded messages are designed to let Americans know there is "always wildfire season somewhere in the United States," said Jay Farrell, executive director, National Association of State Foresters. "This is why it is so important Smokey’s message resonate year-round and nationwide with all Americans."

The new creative is being distributed to media outlets nationwide and will run in donated time and space, per the Ad Council’s model.

Smokey Bear serves as the longest-running PSA program in the U.S., created in conjunction with FCB, which has developed Smokey Bear campaign assets pro bono since his introduction in 1944.

In the 1950s, Smokey Bear made his debut first in radio commercials and then on television, paired with a number of well-known actors and celebrities, including B.B. King and Barbara Stanwyck.