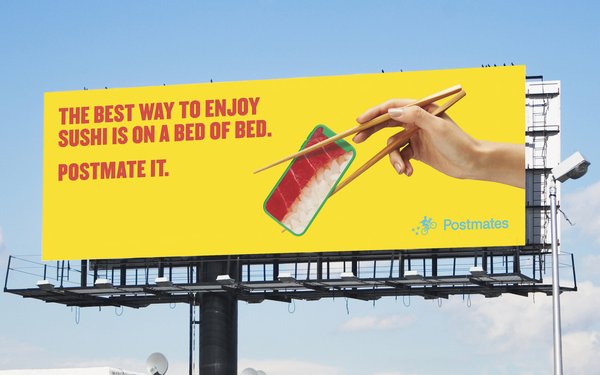 On-demand delivery service Postmates has selected Mother Los Angeles as its creative agency of record. The company is also launching the first wave of a national brand campaign.

According to Kantar Media, Postmates spent $1.3 million on measured media in the U.S. in 2017 and $1.5 million in 2018. The company previously worked with 180LA on an out-of-home campaign that rolled out in Los Angeles in January 2018.

"We often hear from our customers that the ability to Postmate whatever they want makes them feel like they've acquired a new superpower," states Eric Edge, senior vice president of brand and communications, Postmates.

The campaign launches with bespoke OOH executions tailored to specific local insights, right down to the street they appear on. Spanning OOH billboards, bus shelters, wild postings, and wall murals, the first phase of the campaign can be seen in key markets including Los Angeles, New York, and Miami. Noble People handles media planning and buying for Postmates.

Launched in 2011, Postmates delivers from more than 500,000 restaurants, grocery/convenience stores and retailers in about 3,000 cities across the U.S. and Mexico City.