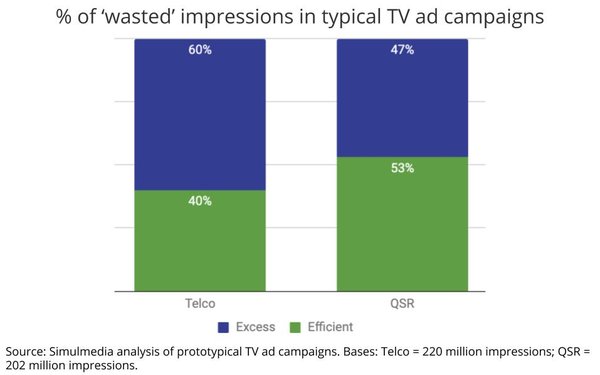 Half or more of a typical national TV ad campaign’s audience impressions are “wasted,” according to an analysis released Wednesday during a presentation by CBS and Simulmedia.

The analysis, which examined two actual campaigns by major national advertisers -- one in the telecommunications category and the other a quick-serve restaurant chain -- found that high percentages of the their impressions were “excess,” meaning they were reaching the wrong viewers or viewers who had already been exposed to the ads an optimal number of times.

In the case of the telecommunications marketers, 60% of its audience impressions were “excess,” while 47% of the QSR marketers were.

“What we found was astounding,” Matt Collins, senior vice president of marketing at Simulmedia said during the presentation with CBS Chief Research & Analytics Officer Radha Subramanyam.

The reason for the waste, they said, was that the campaign’s delivered “excess” frequency by using the wrong mix of network ad impressions based on archaic demographic segmentation.

“Are we willing to walk away from six in ten Americans?” Subramanyam chided, noting that only 43% of the U.S. population even falls into the covered 18- to-49-year-old demographic that is the basis for TV targeting campaigns like the ones cited by Simulmedia’s analysis.

While CBS has long groused about Madison Avenue’s obsession with that demo, or even demographic targeting altogether, the industry lacked the tools to segment the “strategic” targets many brands are actually seeking to reach until now, Subramanyam said.

She made the obligatory pitch for including more broadcast networks in national TV campaigns, because of their greater reach, but also implied that utilizing more sophisticated audience optimization systems can reduce excess frequency.

She acknowledged that many variables -- target, brand category, creative, etc. -- are factors, but that a good rule of thumb for effective frequency was no more than “seven to ten” impressions per viewer. Beyond that, she implied, campaign impresses are simply wasted.