Google confirmed a bug on April 5 that caused website pages to be deindexed, after site owners reported ranking errors.

A lot could be said about whether this happened as a random or a systematic act.

The company did not provide details, so Peter Meyers, marketing scientist at Moz, set out to isolate the timing and the impact of the bug. 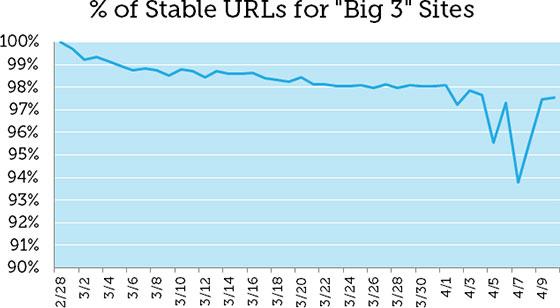 Meyers wrote in an email to Search Insider: “MozCast showed a multi-day increase in temperatures, including a 105° spike on April 6,” wrote Meyers in a post. “While deindexing would naturally cause ranking flux, as pages temporarily fell out of rankings and then reappeared, SERP-monitoring tools aren't designed to separate the different causes of flux.”

It’s not clear whether the bug affected all sites somewhat equally, but in an email to Search Insider, Meyers wrote that knowing whether the bug acted as a random or systematic act is significant.

“Systematic" means detecting whether the bug targeted smaller sites or certain industries. A systematic "bug" could suggest a future algorithm update such as Google testing something. In contrast, if the bug impacted all sites, regardless of the size or industry, it would more likely identify the bug as a mistake by Google.

Meyers was able to confirm whether major sites were impacted by the bug. Analyzing Wikipedia, Amazon, and Facebook, reducing the analysis to 2,454 URLs, it turns out the impact was smaller than across all URLs analyzed, but there's still clear dips on April 5 and 7.

The deindexing bug affected about 4% of websites. Meyers wrote that 4% is considerable, for something as consequential as sites falling out of Google rankings. Google did say the bug was not caused by a deliberate change.

The 4% drop is just what Meyers and crew observed in the Moz data set. “It seemed to hit a very wide swath of sites, but I can't say what the percent of the whole web was,” he wrote. “Best we know from both our data and Google's statements is the worst of it should be over.”

Meyers offers this bit of advice: “If you suspect your URLs have been deindexed, it's worth manually reindexing in Google Search Console,” but it’s a fairly tedious process, and there are daily limits, so focus on critical pages.