Samsung Introduces A TV Set That Lets You Watch Vertically, Aimed At Millennials 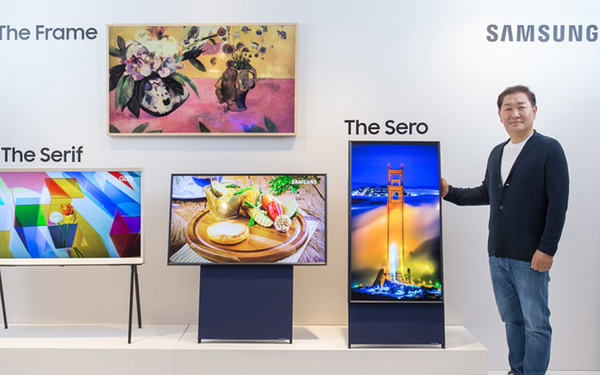 If you can understand why someone would want a vertical TV, you just might be a millennial.

That’s the crowd Samsung is appealing to as it unveils the Sero TV in Korea. It lets users mirror the video they have on their mobile phone screen onto the vertical screen.

And if they want to watch TV the way everybody else does, the Sero swivels into a horizontal (or landscape) mode, just like a smartphone -- but much bigger, of course.

The 43-inch Sero is priced at about $1,600 in Korean currency, starting in May.  It is not being made available in the U.S. yet.

A lot of video watched on mobile devices is watched in the vertical mode, as are most games. As mobile video becomes more prevalent, the vertical TV might make sense to some.

Research confirms that  94% of users hold their smartphones in the vertical position, and a separate 2017 study also says 72% of users watch smartphone videos that way too. And that’s true when they use social media as well.

“Samsung Electronics analyzed the characteristics of the millennial generation, which is familiar with mobile content, and presented a new concept TV. . .  which is based on the vertical screen, unlike the conventional TV,”  says Samsung’s English-language press announcement, which seems to suggest that while the Sero is going on the market, how Korean millennials respond to it will govern how excited Samsung becomes.

The Sero also comes with a 4.1-channel, 60-watt speaker, which can be used to play online music services, including Samsung Music.

And when it’s not being used as a TV, the Sero can be used to present art pieces, photos or as a music visualizer. It comes in a dark blue stand that seems, in photos, to resemble an easel.

The Sero was announced along with updated versions of two existing products, The Serif and The Frame, that have updated looks and new OLED pictures.