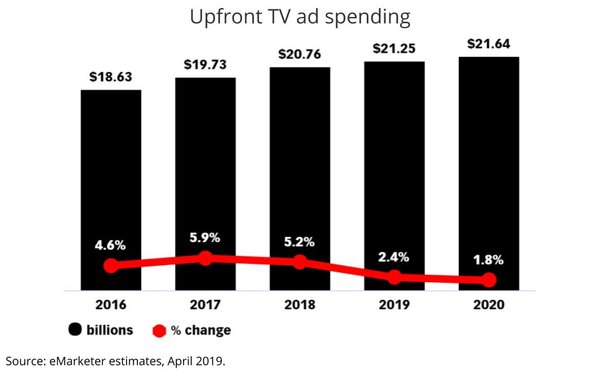 TV upfront revenues are forecast to climb 2.5%, with digital video upfront deals growing 20%, according to eMarketer.

The upfront will kick off in a few weeks.

The upfront market is where big brand TV marketers secure key yearly TV network inventory -- anywhere from 50% to 75% -- over the cost of the broadcast year, which runs from September through August.

The traditional TV networks' upfront deal-making includes placements on broadcast and cable networks, as well as national syndication programming that runs on TV stations. Total yearly network TV revenue is forecast to be around $45 billion to $50 billion, according to industry projections.

“TV companies on both the broadcast and cable side have been able to consistently raise prices on inventory sold at the upfronts,” says eMarketer. “This is expected to continue into the future, as desirable inventory becomes more scarce given viewership declines, particularly in younger demographics.”

The upfront market for digital video platforms is set to climb nearly 20% to $4.39 billion.

On the same day of eMarketer’s upfront release, the IAB estimates digital video ad spending will total $18 billion this year -- up 25% from the year before.

“The majority of the spending doesn’t happen at the Digital Content Newfronts, but at the TV upfronts.” Haggstrom says this is due to networks continuing “to package digital inventory with traditional TV in order to reach people who don’t watch traditional linear broadcasts.” 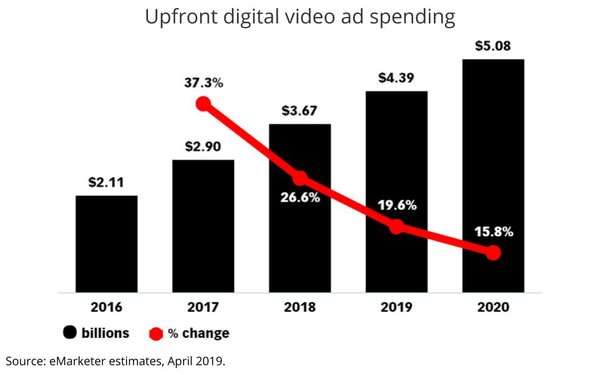