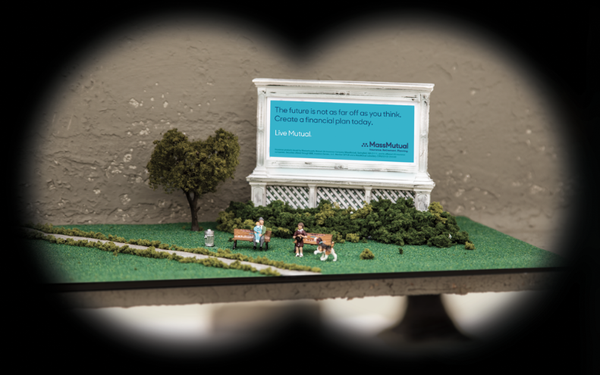 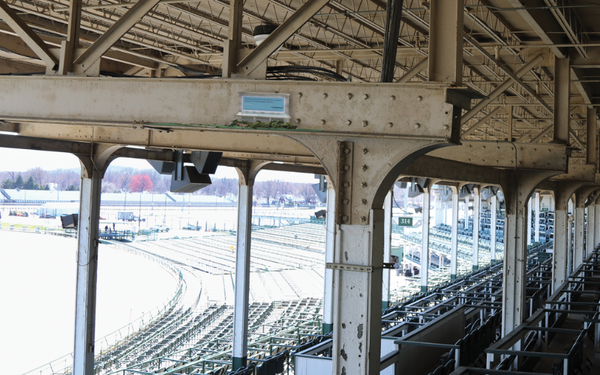 MassMutual is taking over Churchill Downs this year as a lead sponsor of both the Kentucky Oaks on Friday and the Kentucky Derby on Sunday.

The financial services company is using the event as a backdrop for the world's tiniest ad campaign, created by agency Johannes Leonardo. MassMutual believes that small acts of mutuality can make a big difference for a consumer’s financial future, so the brand decided to, literally, get small.

“Small Acts” is a series of 20 miniature OOH messages that will be placed around key areas at the Derby including the stadium, the infield and roof beams. Derby-goers use binoculars to get a closer look at the race, so JL wanted to encourage them to also take a closer look at their finances, which is the message of the tiny ads.

In advance of the Derby, “Small Acts” will be teased on social. The interaction will continue throughout the event with #LiveMutual and #KYDerby.

This is the company’s second year of Kentucky Derby sponsorship, which will include presenting the moment when the Derby's official song, "My Old Kentucky Home," is sung -- just before the horses enter the track.

“At MassMutual, we believe in the power of the human spirit anchored in tradition,” states Jennifer Halloran, head of brand and advertising at MassMutual. “This year, we really wanted to lean into that, and create surprise and delight moments for Derby-goers that pay homage to the rich lineage and history of this event while showcasing the importance of tradition and mutuality.”

The company is bringing to life a series of creative assets and on-the-ground activations leaning into the message that “Tradition Binds Us Together.”

MassMutual was founded in 1861 when 31 investors literally passed a hat around and raised money for their families. In “Pass The Hat,” the brand has created an exhibit highlighting a series of historic hats spanning different eras.

And in keeping with the brand’s theme of mutuality, MassMutual is partnering with the Churchill Downs Foundation for the 50/50 Raffle, whose proceeds will be used to benefit the horse racing community.

The company is sponsoring a mural of roses (the traditional Derby flower) in MassMutual blue where attendees can get a keepsake photo taken.

Finally, MassMutual partnered with the official 145th Kentucky Derby milliner, Christine A. Moore, to create bespoke hat boxes. The branded keepsake will be given to Derby-goers who purchase their hats from Moore.