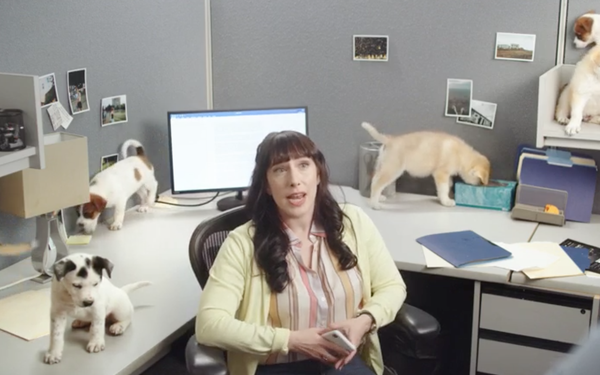 Created by barrettSF, it is the San Francisco-based bank’s second major advertising effort.

Four commercials explain the feature that enables Chime members on direct deposit to get paid early by making money available as soon their employer deposits it -- often up to two days before it’s made available by most traditional banks.

In one spot, an office worker’s warm and fuzzy feelings about getting paid early are externalized by a huge litter of adorable puppies. In the other commercials, two sales associates return from the earlier campaign. The spots showcase the odd dynamic between this unlikely pair who share one thing in common: a deep love of banking with Chime.

“It might sound like a stretch to show people loving their bank,” states barrettSF Associate Creative Director Jen Hart. “But our campaign was inspired by real Chime users who are legitimately gushing about Chime. It’s like we just made a documentary -- a really weird documentary.”

The spots are airing on broadcast TV and across social media platforms.

“We’ve proven that banking can be free, helpful and easy to use and we hope the latest campaign will inspire more people to make the switch from traditional fee-driven banks,” Britt states.