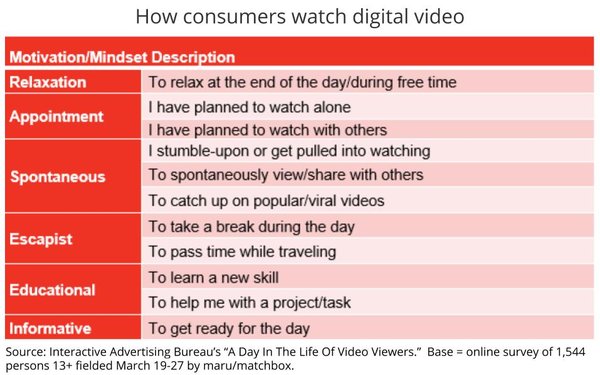 Consumers watch video differently on different screens throughout the day. That is the not-so-surprising revelation of a study presented during a Digital Content NewFronts presentation today.

The finding, which was derived from an online survey of 1,544 consumers, is part of an effort to get advertisers and agencies to think of digital video differently than the conventional demographic, daypart and personal segmentations they traditionally use to think about video media, especially television.

"Digital video isn't traditional TV, and today there are many more viewing options,” Anna Bager, executive vice president of industry initiatives at the IAB, said in a statement releasing the report, adding: “As consumers jump from different content and different screens throughout their day, their openness and receptiveness to advertising changes, and what it takes to successfully reach them shifts as well.”

The report, which can be accessed here, provides in depth segmentations of consumers based on a variety of motivations for accessing and consuming video content across screens.

“Motivation-wise, nearly 90% of weekly online video viewers say that they stream video to relax at the end of the day and during their free time -- the highest percent of any motivation/mindset,” the IAB found, adding, “The next most common viewing motivations are planned viewing (76%) and taking a break (75%).”