Harry's Acquired By Owner of Schick, Wilkinson Blades For $1.37B 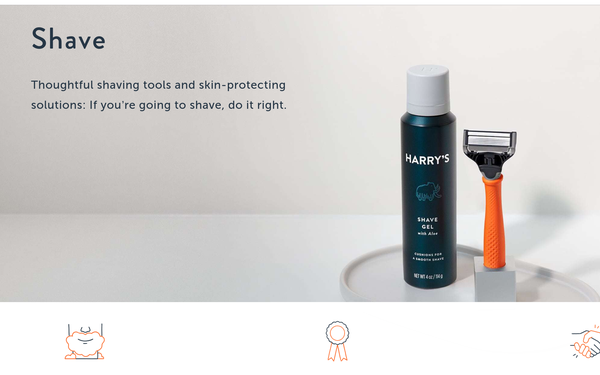 The maker of Schick and Wilkinson razors is acquiring upstart Harry’s Inc, which first grew as a D2C razor brand, for $1.37 billion, most of it in cash.

Edgewell Personal Care Company said Andy Katz-Mayfield and Jeff Raider, the co-founders of the Harry's brand, will serve as co-presidents of Edgewells’s U.S. operations when the deal closes, most likely by the end of Q1 in 2020.

For Katz-Mayfield and Raider, the sale is the successful result of their start-up, which was founded in 2013, and grew to take a 2% share of the razor business. Gillette still dominates, with 47.3% of the market, according to Euromonitor. Schick and Wilkinson share 13.6%.

Though Harry’s is best known for its D2C subscription model, in which customers are sent items on a regular, but changeable schedule, it has also been sold in stores for a while.

In a presentation on Thursday explaining the acquisition, Edgewell and Harry’s presented a graph claiming that in stores where it is now sold, including Walmart and Target, Harry’s takes a 30% category share.

"Building on [our] complementary strengths, our combined company will have leading brands and omni-channel capabilities that are essential to meet the needs of the modern consumer and win in today's market environment," said Rod Little, Edgewell's president and CEO, in a statement..

He lauded the entrepreneurial Harry’s employees and Katz-Mayfield and Raider’s “ingenuity.” Raider is also one of the four founders of Warby Parker, the D2C eyeglass business that burst onto the scene in 2010.

Harry’s is one of a few start-ups to gain the attention and checkbook of a larger company. In 2016, Unilever paid $1 billion to acquire the Dollar Shave Club. Last year, Gillette acquired Waker & Company, maker of Bevel and Form, two product lines targeted at African-American hair and skin care consumers.

Harry’s and Dollar Shave Club have been attempting to expand their product lines. Dollar Shave Club sells shaving cream, body cleansers, deodorant, toothpaste and cologne, and also markets to women. While Harry's does not include the latter three products in its line, it does sell its own brand of boxer shorts.

Worldwide, the men’s grooming market is predicted to grow at the rate of 5.23% annually through 2023, according to Orbis Research. The report noted that retailers including Nordstrom and Macy’s are redesigning stores to give more dedicated space to men’s toiletries.