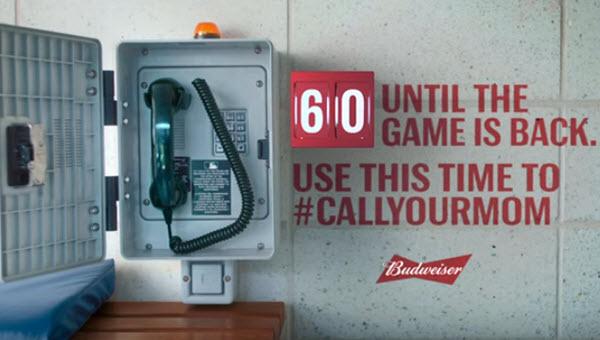 But there’s also a more novel campaign element: The brand is using a full minute during an MLB game on Mother’s Day to show a screen (above) — static other than a 60-second countdown timer — urging viewers to go call their mothers during the break.

The 60-second #CallYourMom break will immediately follow a 30-second ad featuring a clip of New York Yankees player Luis Severino pitching his first shutout, and audio of him calling his mom (below). The 90-second two-part spot will air during Sunday’s Yankees-vs.-Tampa Bay Rays game on the MLB Network.

“For Mother’s Day, we wanted to shed an unexpected spotlight on the legends behind some of the most iconic MLB legends and plays: moms,” noted Budweiser Vice President of Marketing Monica Rustgi. “This campaign honors the role mothers play in some of baseball’s greatest moments. And when those moments happen, the first call you make is to your mom.”

Also over Mother’s Day weekend, Bud partner stadiums are converting in-stadium LEDs to run the #CallYourMom spots; and most will also offer gate sticker giveaways and promotions for fans who can show that they called their moms.

At some stadiums, beer sellers will carry trays with Budweiser and #CallYourMom branding.

And the Houston Astros will actually have #CallYourMom lasered into the foam on the beer offered in certain parts of the stadium.

Meanwhile, on another sports front, Budweiser will implement a free-beer Draught Lottery promotion on May 14 as a tie-in to that day’s National Basketball Association Draft Lottery. Bud is an NBA sponsor.

Specially created Budweiser Draught Lottery Machines will be placed in five Manhattan bars in time for Knicks fans to watch the NBA Draft Lottery that evening. If the Knicks win the #1 draft pick, fans in those bars will get free beer.