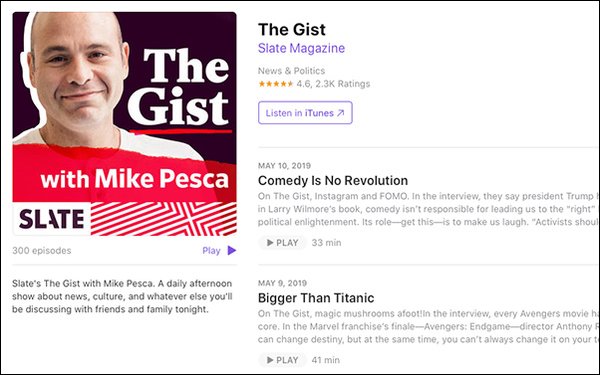 Slate’s podcast “The Gist” celebrated its five-year anniversary last week, making it the longest-running daily news podcasts. The show, hosted by Mike Pesca, dedicated the week to special programmingreflecting on the half-decade of podcasting.

“I’m not doing a rundown of the day’s important story,” Pesca told Publishers Daily. “It’s not a resuscitation of what happened. It’s my take on the news. It’s not Rush Limbaugh or The Young Turks. It’s not ideologically-driven.”

“The Gist” is a “news show that has a lot of host personality and curiosity,” he added. The show usually covers news, entertainment and culture.

Previously producer-at-large at WNYC and NPR, Pesca said the two big challenges when Slate started “The Gist” was determining whether the team could push out a daily episode and “finding an audience" for the show.

When he started “The Gist,” Pesca found podcasting delivers “more erudition, depth, honesty, humanity, and connection than any other medium around," he wrote in a post last week published on the Slate website.

Now daily podcasts are nearly ubiquitous from big publishers, like The New York Times, The Washington Post, The Economist, The Wall Street Journal — even millennial-focused media brands, like TheSkimm.

“Podcasting benefits from what some consider its flaws: Podcasts have a high bar to entry; they take a long time to consume; they’re hard to share,” Pesca writes. “These perceived flaws have insulated podcasts from the excesses of the synoptically twitchy media world. Instead of clickbait, canceling, targeting, data mining, tracking, and trolling, the biggest problems in podcasting are excessive ads for online postage services and improve experiments that should have been edited down.”

In an op-ed for The Washington Post, Pesca argues podcasts are the “antidote” to the “toxicity” of the current news environment, which he believes is riddled with disinformation and a fight for audiences' attention. Podcasts are the opposite; they require their audience to focus on one thing from one source for a set amount of time.

But podcasting has its own challenges. The next step for “The Gist” is “to communicate to people what the show is,” and learning to better promote episodes, Pesca said.

“We are doing some threaded tweets, Instagram stories and commissioning some polls about news” in order to learn more about the show’s audience and their attitudes towards news stories, he said.

Next year, “The Gist” will host Democratic candidates who “will be scrutinized in a way that is useful for a Democratic voter,” Pesca said.

Five years into the audio business, the podcast industry “is so crowded,” and discovery of shows is difficult. “Even the most popular shows rarely go viral," Pesca writes.

While that may impact the number of podcast listeners, Pesca also believes "this resistance to virality saved them from falling into the trap of becoming clickbait or, worse, easily weaponized tools of disinformation.”