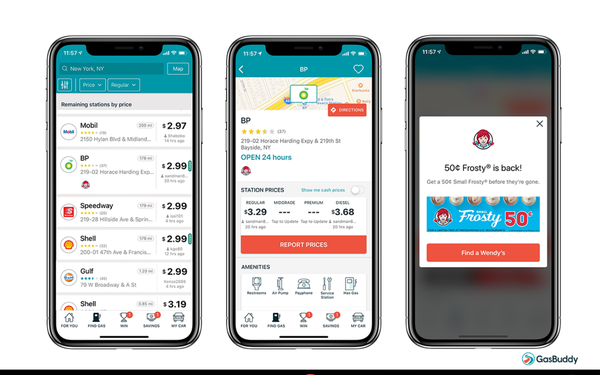 Wendy’s has about 6,000 locations — and significantly, 2,655 of them are within one-tenth of a mile from a gas station, or even located inside one.

That’s according to GasBuddy, the website and app that serves motorists actively looking for places to fuel up. Its prime purpose is to tell its 12 million unique monthly where gas is the cheapest at any given moment by providing up-to-the-minute, crowd-sourced reports.

But if there’s a Wendy’s nearby, that’s even better.

The burger chain is the first to partner with GasBuddy’s new Badges program, which features GPS-based data to connect its “gas buddies” to stations and Wendy’s locales. It started last week, and probably will get its best test during the busy upcoming Memorial Day weekend.

“GasBuddy provides us a unique way to reach millions of drivers during the planning portion of their trips to keep Wendy’s top-of-mind in a seamless and relevant way,” says Wendy’s Jimmy Bennett, senior director of media and social, in a statement.

Increasingly, he says, those places are competing with traditional fast-food restaurants, too, so it’s to Wendy’s benefit to remind consumers there may be a better meal just a little bit down the street.

The gas station business took in $600 billion a couple years ago and $623 billion last year, he says. But 20% of that increase came from the convenience store/food service -- the “c-store” -- side of the business. That’s a significant chunk that is being diverted from fast-food places.

Additionally, the website Pymnts.com says millennials --  specifically older millennials -- “buy gas at a higher rate than other consumers and are more likely to buy other items when visiting a c-store.”

“Gas stations are turning into destinations for meals and blurring the lines into being actual restaurants,” Grossman says. “People don’t usually head out just to get gas.”

Still, most GasBuddy users aren’t looking for the best deal on gas at the absolute last minute, he adds. They’ve usually figured it into their day a little ahead of time.

Grossman previously headed U.S. sales for Waze, the crowd-sourced traffic app that likewise hits consumers who are on the go. He came to GasBuddy as the company revamped its ad sales strategy, emphasizing useful gas price information coupled with useful advertising.

GasBuddy says it gets gas price reports from 150,000 stations (virtually all the stations there are), and its GasBuddy members provide 1.7 million gas price updates every day.

When he was in high-priced Chicago last week, Grossman says he discovered that gas prices varied as much as $1.40 a gallon within a geographically small slice of the city.

Prices do fluctuate wildly, because 62% of the nation’s gas station are independently owned and mighty competitive, according to Grossman. “Gas prices can change not just daily at some places, but hourly,” he says.