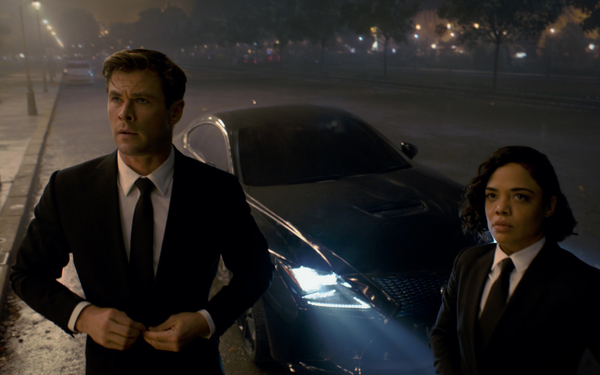 Lexus is launching a spot promoting the 2020 Lexus RC F and "Men In Black: International," opening in U.S. theaters June 14.

The 30-second spot, produced by Sony and supplemented by Team One, shows off the vehicle with the two stars of the movie, Chris Hemsworth and Tessa Thompson. Thompson calls dibs on driving and gets in the driver seat, only to discover the car is right-hand drive because it’s a European version.

According to the voiceover from Minnie Driver, “When you’re protecting the earth from the scum of the universe, a little extra horsepower never hurts.”

The spot debuts on broadcast starting today and will air during cable and network sports including the NHL Stanley Cup Finals, late night including "Late Night with Seth Meyers" and the Tonight Show with Jimmy Fallon, and on prime time and cable, in addition to advanced TV, digital and social.

In partnering with Sony to create the co-branded spot, the goal was to build anticipation for the film -- while also highlighting the RC F's style and performance, says Lisa Materazzo, Lexus vice president of marketing.

“We wanted to convey that to outfit a Men in Black agent, you need the best of everything, including the best car,” she says. “We decided to mirror the scene where Tessa Thompson's character gets outfitted with her Men in Black suit and shades, and put the RC F in a similar white room to show off its styling as the ultimate Men in Black ride.”

“While we're executing some similar elements in the marketing campaigns, 'Men in Black: International' and 'Black Panther' are very different films, with different strategic partnership goals,” Materazzo tells Marketing Daily. “For 'Men in Black: International,' we're putting the spotlight on the 2020 Lexus RC F as the ultimate alien-fighting machine. If you look back at the 'Men in Black' movies, the agents have always had a high-tech ride to help them protect the earth from the scum of the universe, and we took that to new heights in this film.”

For "Black Panther," the automaker had campaigns for both the Lexus LC 500 luxury coupe and the Lexus LS 500 F Sport.

“The fierce LC is quick and agile, so it was a natural fit to pair with the cat-like reflexes and superhuman skills of the Black Panther,” Materazzo says. “We also utilized the Black Panther’s duality as a superhero and as royalty to show the two sides of the LS: performance and luxury."

Finally, "the key for both partnerships is that they are authentic for the vehicles and for Lexus. ”