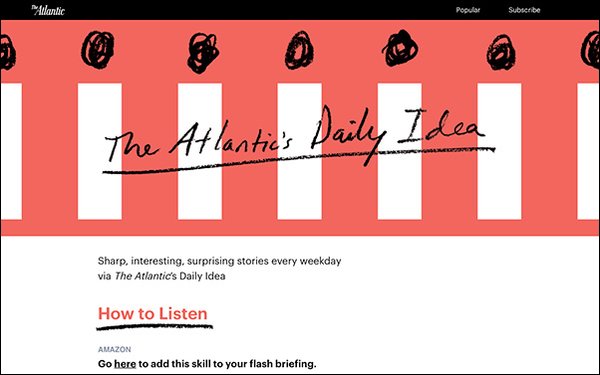 Building on its portfolio of audio platforms, The Atlantic introduced a new smart-speaker skill called the “Daily Idea.” The skill, which delivers a different story every weekday, taken from the outlet’s most compelling reporting, is accessible across Amazon Echo and Google Home.

Reporting for “Daily Idea” will come from various sections of The Atlantic, including science, tech, health, family and education, in addition to segments tapped from the magazine’s archives.

The skill is accessible by using the phrase “Alexa, open The Atlantic’s Daily Idea” on Amazon Echo and “Google, play news from The Atlantic” on Google Home.

The first two-minute segment to appear was called “How Long Can You Wait to Have a Baby?” with other condensed stories like “An Artificial Intelligence Developed Its Own Non-Human Language” and “The Case for Locking Up Your Smartphone” on the way.

Global consulting, technology-services and digital-transformation company Capgemini is the segment’s exclusive sponsor. Capgemini also works extensively within the world of AI, lending itself as a good fit for a smart-speaker skill launch.

The Atlantic joins a slew of other publishers that have recently launched smart-speaker skills of their own. NPR and National Public Media have each made strides in the space, with the former’s popular show “Wait, Wait… Don’t Tell Me!” launching a quiz game earlier this year.

National Public Media’s president-CEO Gina Garrubbo stated last year during her keynote at MediaPost’s Publishing Insider Summit: “The voice activated future bodes very well for anyone working in the podcasting space. The growth will be there. The audience engagement is there, and it’s also becoming routine.”

Around the same time NPR launched its quiz, The New York Times’ T Brand Studio announced it would produce voice skills for advertisers. The outfit told Axios it would begin to create custom skills for around six figures. Its first collaboration was with luxury car company Audi.

The Time’s Sunday edition moved further into the space, launching special skills tied to its travel and music coverage and The New York Times’ Book Review.

Earlier this month, Outside launched an extension of its “What You Missed” newsletter with its “Unpacked” podcast. The show is available on podcast platforms like Spotify, Apple Podcasts and Google Play, but is also via the Alexa app, Google Home and Assistant. The show was produced to connect to smart speakers in an effort to allow audiences to choose the platform that best suits their lifestyle.