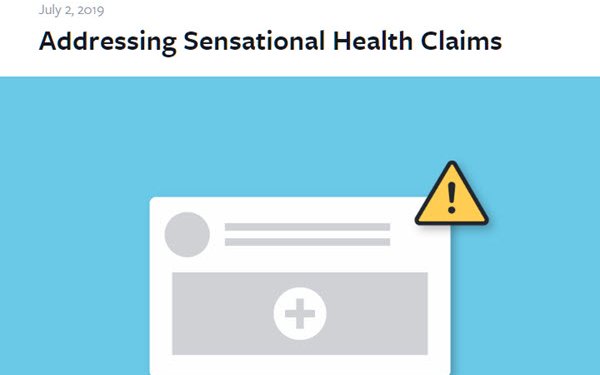 According to The Wall Street Journal, the social media giants began the efforts after the Journal presented them with its investigative findings that both platforms "are being flooded with scientifically dubious and potentially harmful information about alternative cancer treatments, which sometimes gets viewed millions of times."

Facebook Product Manager Travis Yeh announced, in a blog post published yesterday -- the same day that WSJ published its report on the rampant misinformation -- that Facebook had last month started to down-rank posts touting "magical cures" and other exaggerated or sensational health claims in users’ News Feeds, as well as posts attempting to sell products or services based on health-related claims.

“We know that people don’t like posts that are sensational or spammy, and misleading health content is particularly bad for our community,” Yeh noted in the post.

As with clickbait content, Facebook's content team is now identifying phrases commonly used in exaggerated or misleading health claims and product promotions. Those posts are then shown lower in News Feeds, resulting in reduced distribution.

A spokesperson for YouTube parent Alphabet told WSJ that YouTube has also been "cutting off advertising for bogus cancer-treatment channels" by "working with medical doctors to identify content promoting unproven claims and medical conspiracy theories" and tweaking its algorithms to "reduce the number of times these dubious videos are presented to users."

"Medical snake oil is an age-old problem, but the internet has dramatically extended the reach of bad actors peddling fixes for complex conditions that don’t always have cures," notes the Journal. "The amount of misinformation is so extensive — and publishing on tech platforms so easy—that it can be hard to weed out." Doctors say that false cancer remedy claims often create plausibility by containing a grain of truth, or inflating results of early studies.