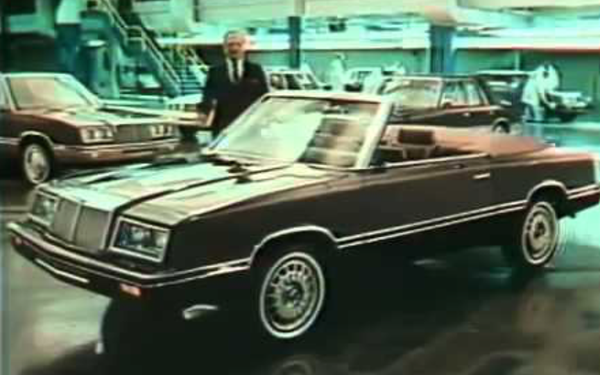 Lee Iacocca wasn’t afraid to get in front of the camera and share his vision for Chrysler Corp. in a bold, no-BS way. The automotive icon has died at age 94.

TMZ broke the news, followed quickly by Jalopnik. Market News also had an early post gathering some tributes to the leader. By the time you read this, there will likely be dozens of obituaries to choose from -- so I’m going to skip the basics and cut to his effects on automotive advertising.

One of my earliest memories of automotive marketing is this 90-second video from the 1980s, in which Iacocca, then chairman of Chrysler, talks about how the automaker came back from near death, and what it had planned for the future.

“A lot of people think America can’t cut the mustard anymore, that quality counts for nothing, and hard work for even less. And commitment? That went out with the hula hoop,” Iacocca says in the video as he walks through an auto assembly plant. “Well, when you’ve been kicked in the head like we have, you learn pretty quick to put first things first. And product comes first. And product is what brought us back to prosperity.”

That heartfelt video was created by Bozell, Jacobs, Kenyon & Eckhardt, which was later known as B, J, K & E, until it became simply Bozell.  I wrote many stories about Bozell’s work for Chrysler during my early days of covering the business for Adweek. But Iacocca was already gone, having retired from the company in 1992 when I was still a non-marketing automotive reporter at WardsAuto.

”I did have the honor of presenting Jeep marketing to Mr. Iacocca on several occasions. What an experience!“ Toplolewski tells Marketing Daily. “He wouldn't say a word as I presented. He smoked his cigar and just listened as he leaned back in his giant leather chair flanked by Bob Lutz and the rest of his lieutenants.”

“As I finished presenting hoping that he approved, he would just say thank you and move on to other business, like interior colors for the new Grand Cherokee,” he recalls. “So we quickly began packing up to leave the room.  Someone would always try to get one of his cigar butts out of an ashtray as a trophy for a good meeting.  We succeeded a couple of times and had the cigar butt encased with the date and displayed it for the whole agency to see. Kind of weird, but we considered it a symbol of a job well done and added it to our collection of Cannes Lions, Clios, One Show Pencils. I considered the cigar butt to be one of the most prestigious.”

Before joining Chrysler, Iacocca rose through the ranks at Ford. His claim to fame was helping to create one of that automaker’s most iconic brands, the Mustang. He eventually became Ford’s president.

“His Mustang project at Ford defined the entire category of the ‘Pony car,’ affordable muscle/performance cars people could drive every day,” writes Jason Torchinsky in Jalopnik. “He understood the potential of the minivan when Ford passed on the project, taking it to Chrysler where it became a best-seller, and he even helped to save convertibles, introducing the Chrysler LeBaron convertible at a time when convertibles were dying out and famously without conducting any market research.”

Iacocca was courageous in a way modern-day automotive executives likely can’t fathom. But maybe they should try. Iacocca lived his life by one of my personal mottos: “Nothing ventured, nothing gained.” He showed marketing genius on many occasions, and there may never be another with his vision. R.I.P., Lee. 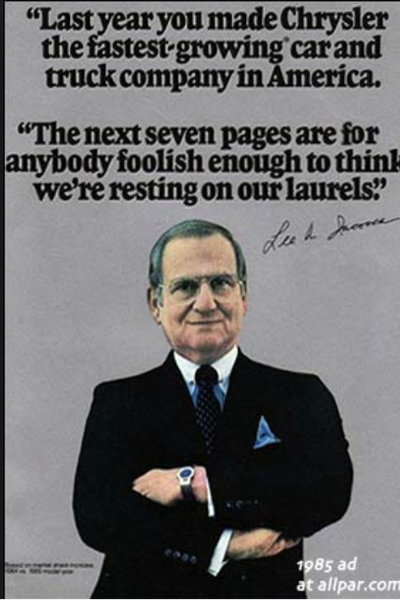