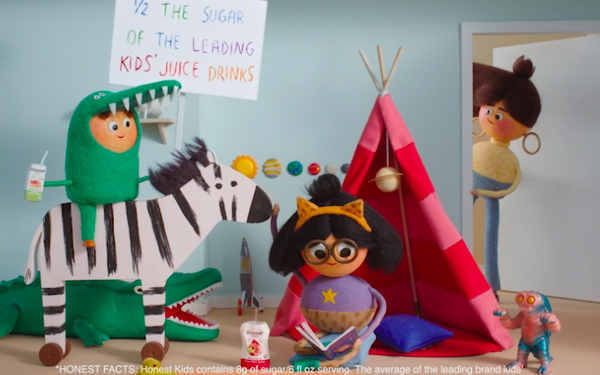 It’s one thing to tell consumers what your brand is doing to support organic farming and fair trade. It’s another to let them see for themselves exactly what that means right at the point of purchase, as Honest Tea will be doing with new, interactive vending machines in four U.S. cities.

It’s part of the company’s “small decision. BIG impact.” brand campaign, which launches July 16 and will largely be supported by outdoor advertising along with social media, ads on ecommerce sites and podcasts, and on such platforms as Hulu, Amazon Fire TV and on-demand TV networks.

Honest Tea has placed new “Up Your Impact” vending machines for its products in Chelsea Piers in New York City; Bethesda Row in Honest’s Maryland hometown; Cherry St. Pier in Philadelphia; and Grand Park in Los Angeles. The machines will showcase the company’s characters, playing videos that explain the role of Fair Trade USA and the OFRF, with 100% of purchases -- plus whatever else someone wants to donate -- going to one of these organizations.

One 30-second video segment depicts the Honest Tea characters enjoying the taste and lower sugar content of organic green tea while showing the positive impact that purchases have on the town in India where the tea leaves were grown.

“We learned from research that a lot of consumers are not fully aware of how the fair-trade model works,” says Seth Goldman, co-founder & TeaEO Emeritus of Honest Tea. “So we developed our small decision. BIG impact campaign wanting to challenge this notion that smaller, day-to-day choices don’t make a difference. By using real examples of how our Fair Trade investments have supported our supplier communities -- such as new bicycles, eyeglasses and school roofs -- we’re able to demonstrate the impact in a simple yet tangible way.”

While Honest Tea’s primary target audience is millennial families, the company hopes to reach the "many consumers looking to incorporate wholesome food and beverage options into their everyday lives"  who are also open to the altruistic message, says Goldman.

Founded in 1998 and now a unit of The Coca-Cola Company, Honest Tea has raised more than $2 million in Fair Trade Community Development Funds for reinvestment in supplier communities for such resources as clean water, schools, healthcare and farming equipment.