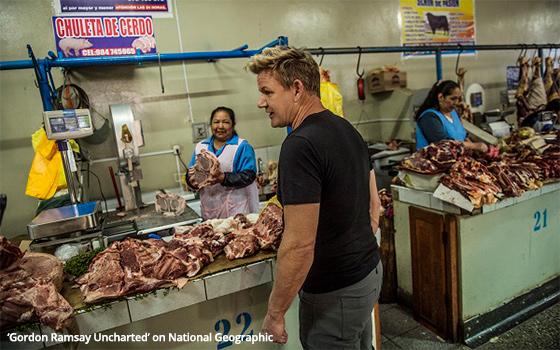 Both titles, and indeed both shows, take viewers on far-flung excursions to some of the farthest reaches of the Earth in search of culinary rarities. Come to think of it, Andrew Zimmern has also trod some of the same exotic ground for years on his Travel Channel series “Bizarre Foods.”

But despite all of the inroads made by technology to make the world seem smaller, it is still large enough apparently to accommodate Gordon Ramsay on this new global quest for the unusual and the delicious. “Gordon Ramsay: Uncharted” premieres this Sunday on Nat Geo.

In the series’ opener, the show earns its “Uncharted” title -- not because chef Ramsay “discovers” any lost tribes or the like, but because this premiere excursion takes us to a place and introduces us to people we are rarely, if ever, exposed to on television.

The episode (the only one Nat Geo provided for preview) is a very fitting addition to the Nat Geo content stable, and fulfills the expectations implicit in the Nat Geo brand.

Looking to take a trip to a place you are not likely to go yourself? On this show, TV takes you there. And if I have written it once, I have written it a thousand times: TV's best feature is its ability to take us places we cannot, or will not, go ourselves.

In the premiere of “Uncharted,” Ramsay travels high up in the Andes mountains of Peru to a fertile, high-altitude region known as the Sacred Valley. There, he connects with a variety of natives who introduce him to their native cuisine.

On this one-hour show, Ramsay is seen helping to prepare, and then eating, guinea pig skinned and roasted whole on a stick, alpaca hearts, purple potatoes, a fried Andean caterpillar that is found on the inside of a cactus that grows only on the edge of perilous cliffs, and more.

One of the refreshing characteristics of this show is that Ramsay does not relish everything he tries. For example, he does not pretend to enjoy the sautéed worm, which had been described to him as a delicacy whose flavor is a combination of calamari and shrimp. He does not find this to be so, however, and without meaning any disrespect to his Andean host, he disdainfully spits it out.

He does acknowledge, however, that for the people who dwell high up in the Andes, this worm is apparently an age-old source of protein.

For Gordon Ramsay, these far-flung travels represent a new environment for him. For years, we have been accustomed to seeing him flailing about in various kitchens letting the f-words fly. In fact, cursing has settled in as something of a trademark for him, and he is no less restrained in this Nat Geo show.

Whether or not one cares for his liberal use of profanity (which is bleeped in all usages), Ramsay is one of the hardest-working and most ubiquitous personalities on TV today. Joining him as he travels the world in search of exotic foods is well worth the trip.