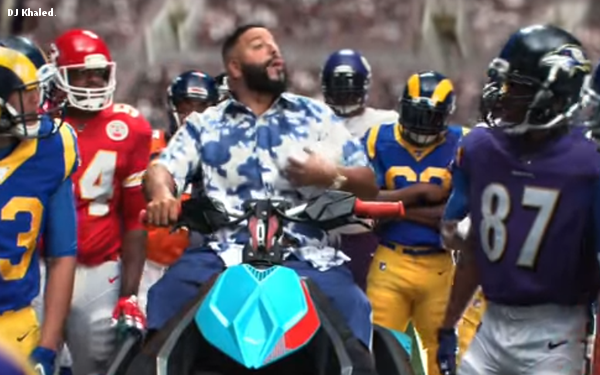 All 32 NFL teams will have officially begun training for the 2019 season by the end of this week. But the next really big date for football fans is Aug. 2, when Electronic Arts Sports releases its new-edition Madden NFL 20 video game.

The campaign will appear on digital, social and broadcast media, with new ads rolling out as the season progresses.

EA’s past ads stressed how the average game player can be a hero, and that theme appeared again this year.

"Madden 20 allows a culture of gamers to achieve superstardom in a myriad of ways,” said  Omid Amidi, the creative director, in a statement.  “For this year's campaign, it was important for us to bring together a collective of cultural icons to showcase how gridiron greatness is within everyone's reach” whatever your station in life.

The video ends with the tagline, “The power is in your hands." YouTube also has Madden NFL 20 videos that show the improvements EA made in this year’s game.

The first video has its gags -- mostly inside sports jokes -- but it seems less surreal than videos for previous iterations. For example, last year's long (three-and-a-half minute) video featured rapper Nicki Minaj and other stars in the story of a fictional guy named Will known for making a play call so legendary he gets his own brand of hot sauce.

The next big showcase for this year's ad will be on “NFL Kick-Off,” the official title for the first game of the season with the Green Bay Packers playing the Chicago Bears on Sept. 5.

The super-popular Madden NFL video game series has sold upward of 130 million copies since it was first developed in 1988. It's named for former football coach, TV color commentator and NFL Hall of Famer John Madden, who is 83 and probably as well-known today for the game as he was when he was earning all those accolades on the football field sidelines and in the broadcast booth. (He gets paid $2 million a year for the use of his name, Moneyinc. com reported last year.)

Many current NFL players grew up playing the Madden games, and still do today.

Now, it’s so big it even spawned controversy among players. EA rates 3,000 NFL player, and predictably, some players are peeved about their ranking. Others are elated.

According to Business Insider, wide receiver DeAndre Hopkin, who scored a near perfect 99 rating, said that being top-rated on Madden NFL meant more to his children than making the NFL’s All-Pro team.