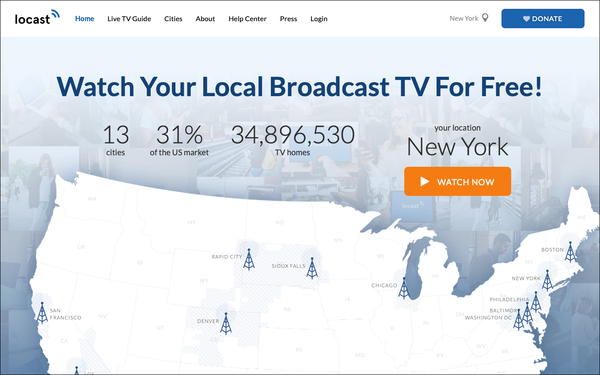 “Defendants stream plaintiffs’ programming over the internet twenty-four hours a day, every day, without authorization, potentially to anyone in the world with an internet connection,” CBS, ABC, Fox and NBC Universal allege in a complaint filed Wednesday in U.S. District Court for the Southern District of New York. “Locast is engaged in a massive infringement of plaintiffs’ exclusive rights under the Copyright Act.”

The networks are seeking an injunction that would prohibit Locast from streaming TV programs, as well as monetary damages.

Locast, created by the nonprofit Sports Fans Coalition, launched last year with broadcast feeds from 13 stations in the New York City area. The company since expanded to include feeds from Washington, D.C., Baltimore, Boston, Chicago, Dallas, Denver, Houston and Philadelphia. Locast, available on the major streaming platforms, is free for users but requests donations of at least $5 a month.

The broadcasters argue Locast infringes copyright by retransmitting programs without a license. The defunct company Aereo also attempted to retransmit over-the-air television online, but was shut down by a 2014 Supreme Court decision.

Locast says its service, unlike Aereo's, is protected by a provision in the Copyright Act that allows nonprofits to boost TV signals.

Locast's lawyer, David Hosp, stated Wednesday the company's activities “are expressly permitted" by the Copyright Act. "We look forward to defending the claims -- and the public's right to receive transmissions broadcast over the airwaves -- in the litigation,” he stated.

The TV networks argue Locast doesn't fit within that provision. “Locast is nothing like the local booster services contemplated by Congress in creating this narrow exemption,” the lawsuit alleges. “Locast is not a public service devoted to viewers whose reception is affected by tall buildings.”

The networks add: “Locast is not the Robin Hood of television; instead, Locast’s founding, funding and operations reveal its decidedly commercial purposes.”

The lawsuit notes Locast recently received a $500,000 donation from AT&T, and that its founder, David Goodfriend, is a former Dish Network executive. The networks allege AT&T and Dish “provide Locast with valuable nationwide distribution of the Locast app on the internet-connected set-top boxes of their subscribers.”

The lawsuit also alleges Locast helps Dish and AT&T in several ways, including by enabling them to “gain leverage in negotiations with broadcast stations.”

AT&T has been directing customers to Locast during the current blackout of CBS television stations.

The National Association of Broadcasters stated Wednesday it “wholeheartedly backs” the lawsuit.

“Locast is all about gaining a commercial advantage for its backers and others in violation of U.S. copyright law to the detriment of local broadcast TV viewers,” the NAB stated.