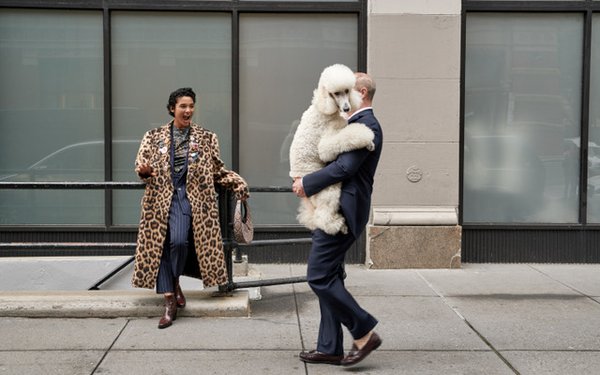 As it gears up for the October opening of its New York City flagship, Nordstrom is running new ads that show just how hip it is to the city’s street style.

The campaign includes a mix of models and real New Yorkers, some cast right on the spot, says a company spokesperson. And the mix of brands and looks featured are classic Nordstrom high/low offerings, “from Valentino to Vans, Balenciaga to Levi’s.”

Powell took photos up and down Broadway, as well as on park benches and boardwalks. Meyerowitz’s daughter and granddaughter appear in some shots. And a handful are reminiscent of some of his most famous photos, including a woman fixing her makeup on a scooter, and a man lugging a jumbo poodle.

The campaign is in support of fall fashion collections as well as Nordstrom’s expanding presence in Gotham. In addition to the flagship store, at 57th Street and Broadway, the retailer is also readying two Nordstrom Local neighborhood hubs.

The expansion comes as Nordstrom and other department stores struggle to stay relevant. In its most recent quarterly results, the Seattle-based retailer saw sales fall 3.5%. For its full-price department stores, sales tumbled 5.1%.

The company is stepping up its expansion of the Local concept. These small stores, offering plenty of services as well as omnichannel conveniences, have been driving outsize growth for the company in Los Angeles. And they fit in with broader industry efforts to meld the demand for in-store shopping with the ease of online purchases.

A new report from the NPD Group says that the preference to see, touch, and try on clothing before they buy it is the most important factor for 55% of consumers when they choose in-person shopping over an e-transaction. And when they’re in stores, 79% try apparel on before buying it, with 42% saying they do so all or most of the time, and 37% heading to the fitting room at least some of the time.

And while buy-online, pick-up-in-stores has been around for years now, stores are enhancing it with quicker turnarounds or curbside pick-up. In the last 12 months, 21% in NPD’s survey say they had bought either apparel or footwear online and picked it up at the store.