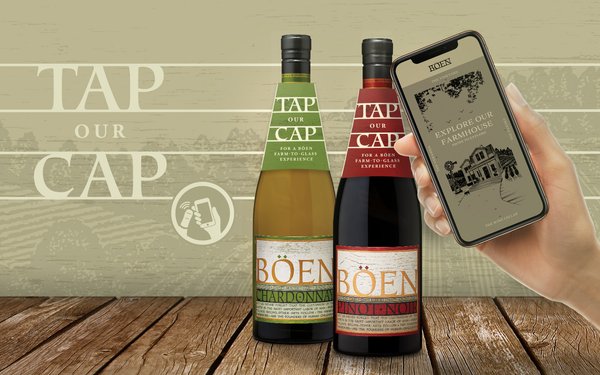 Boen wine is inviting consumers to "tap the cap" of their Napa Valley bottles  to get information about that wine they're thinking of buying.

They can continue to get other specific info -- like suggested food pairings, a tour of the vineyard farmhouse and other social media features -- once they’re home by entering a code on the back side of the cap.

NFC allows devices like smartphones to connect with NFC-equipped objects (like the wine caps) at a close-in range. Its biggest use so far has been by consumers using NFC-equipped credit cards to sail through checkout lanes just by brushing the card through an NFC reader.

SharpEnd, which officially adds “The Agency of Things” to its full company name, is exclusively devoted to helping create marketing uses for connected packaging in an Internet of Things world. It first used an NFC device for Absolut vodka in 2015 and since then for Malibu Rum, (as MediaPost reported in this story) and now all kinds of clients including Estee Lauder, Nestle and PepsiCo.

For Unilever’s company-wide sustainability project, NFC will be perfect for connecting consumers not only to recycling locations but specific ones in their own neighborhood, explains SharpEnd founder and CEO Cameron Worth. He says that’s just one example of how NFC can bring a “service approach to brand-building.”

The Böen bottle cap information is, ideally, best conveyed in the wine store in just 15 seconds. But there are secondary uses for the brand, which can connect to a consumer's social media account and get to know the ways customers are enjoying the product.

Worth says all the information provided to customers has its advantages. “We know consumers value connected products more.”

Worth says the NFC wine caps ushers in “new ways we can talk” to consumers. So far, with the more promotional projects for Malibu and Absolut, engagement rates have been encouraging. He wouldn’t discuss how much those NFC-imbued caps add to the cost of the product, but  suggests it’s not so much it affects the price consumers pay.