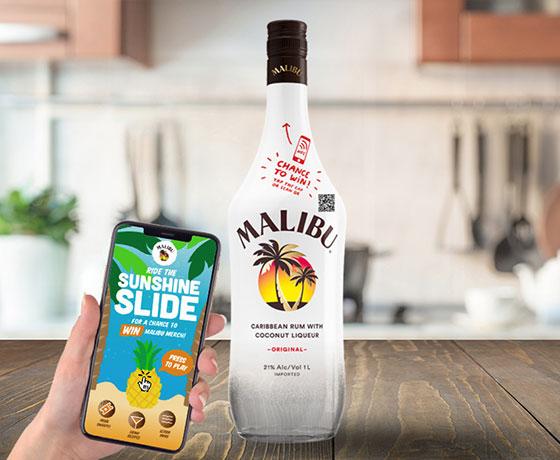 Just in time for summer, Malibu is launching yet another limited edition, connected bottle campaign.

The bottle integrates NFC (near field communication) technology into the cap of the bottle with a QR code printed on the bottle neck.

Scanning the QR code or tapping the NFC tag launches an interactive mobile game where consumers can play to win Malibu-branded swag and receive cocktail recipes.

The idea of interactive bottles is not new. The London-based SharpEnd, which bills itself as the agency of things, has been pioneering connected bottles, starting with Absolut Vodka back in 2015, which I wrote about here at the time (‘Agency Of Things’ To Connect Brands).

SharpEnd and Malibu Rum launched their first connected bottles in the summer of 2016 and have continued to experiment with the technology ever since. The current campaign was created in-house.

“The IoT space is really maturing with more brands leveraging products as engagement platforms,” Cameron Worth, founder of SharpEnd, the IoT agency, told me.

“Embracing the closure as an engagement point is also a great new development and will make it easier for more brands to skip certain complexities in the supply chain. It’s also clear that NFC is continuing to play a dominant role in driving consumer appetite for connected things and is fast becoming a standard expectation, particularly in Malibu’s case given their long history with technology innovation around their bottles. Well done to all involved.”