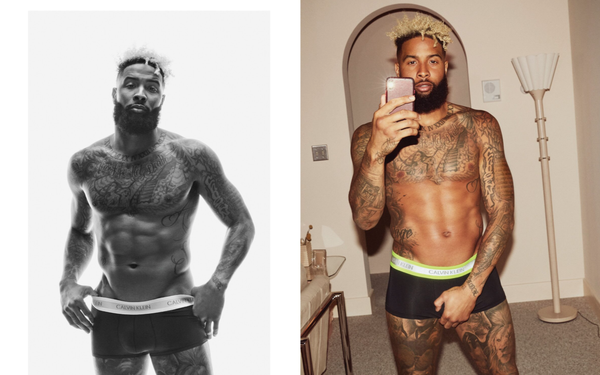 “The result blurs the line between the public image and private realities of our unapologetic cast and asks the question, how do you do sexy? Perfectly filtered or IRL [In Real Life] raw?” according to the company. “The campaign brings a unique point of view on sexy by capturing both the posed and stripped-back sides.”

The effort features a cast of celebrities across genres.

Campbell has been a frequent model in the Victoria's Secret fashion show.

In a series of videos by director Bardia Zeinali and still images by photographer Daniel Jackson, the campaign “brings to life the playful and pure perspective of sexy; one that encourages self-expression and underscores the idea that sexy is a state of mind,” according to the company.

It highlights the brand’s new underwear offerings including Neon, 1981 Bold, across both men’s and women’s categories, and Liquid Touch, in the women’s tailored bra category.

The effort features a “video-first approach” and will be supported by digital, social and outdoors.

The brand came under fire in May for its campaign that featured a brief kiss between computer-generated influencer Miquela Sousa and model Bella Hadid. Critics said the ad was “tone-deaf” and “queerbait” since Hadid identifies herself as heterosexual.

The brand quickly issued an apology on Twitter: "This specific campaign was created to challenge conventional norms and stereotypes in advertising... We understand and acknowledge how featuring someone who identifies as heterosexual in a same-sex kiss could be perceived as queerbaiting. As a company with a longstanding tradition of advocating for LGBTQ+ rights, it was certainly not our intention to misrepresent the LGBTQ+ community.”

Calvin Klein got a new CEO  in June when parent PVH Corp. appointed Cheryl Abel-Hodges to take the place of Steve Shiffman. Abel-Hodges previously was group president, Calvin Klein North America and The Underwear Group, where she oversaw design, merchandising, product development and planning for all of PVH’s underwear and women’s intimates businesses.

First-quarter revenue in the Calvin Klein business was flat at $890 million compared to the prior-year period. Calvin Klein North America revenue increased 2% to $424 million compared to the prior-year period, due to an increase in the wholesale business, partially offset by a 5% decline in North America comparable store sales.