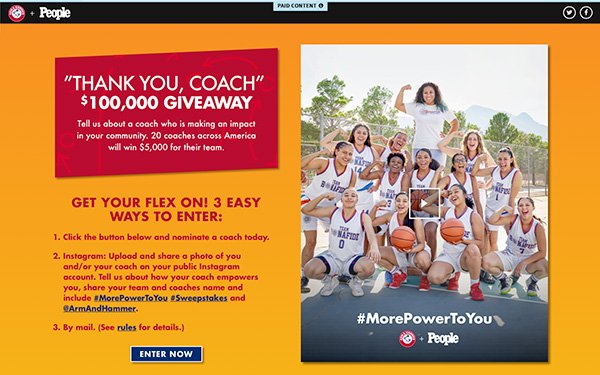 Meredith Corp.’s People magazine and baking-soda company Arm & Hammer are partnering on a new campaign and giveaway to show appreciation for coaches.

The “Thank You, Coach $100,000 Giveaway” encourages people to nominate coaches “who go above and beyond to inspire and empower their team members,” according to the companies.

The seven-week campaign will consist of several editorial features in People, beginning with the August 26, 2019 issue on newsstands today. Stories will spotlight coaches “who are helping to empower others.”

It will also include an advertorial featuring the story of Coach Sam Stukes from El Paso, Texas and her youth program “Bonafide Basketball.”

The campaign will also produce short-form and long-form videos, as well as ads that will roll out on the Arm & Hammer website, social channels and in print.

Arm & Hammer will award $5,000 to 20 coaches across the country who help their teams and communities.

Coaches can be nominated on Instagram, online or by mail before September 30. Winners will be selected in a drawing in mid-October.

The partnership was led by The VIA Agency, the creative advertising and digital agency for Arm & Hammer, and Wavemaker, the media, content and technology agency for the brand.

“This program created an opportunity for us to bring together the power of People’s iconic ‘Heroes Among Us’ editorial feature and the power of Arm & Hammer as an enabler of heroes,” stated Jane Barasch, executive director of client leadership at Wavemaker US.

“Heroes Among Us” is a long-running editorial franchise from People that spotlights regular people who have done heroic or inspiring things in their communities.