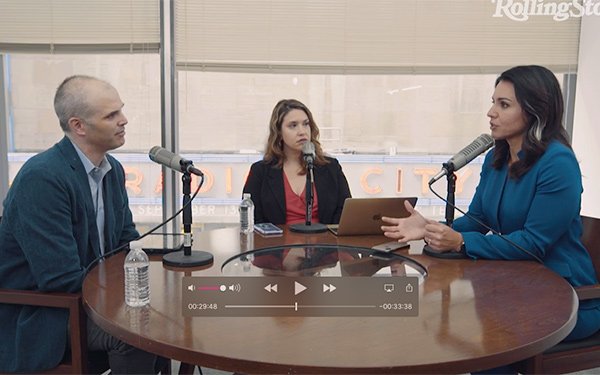 Weekly episodes of “Useful Idiots” feature coverage of the 2020 campaign and interviews about the political news of the week. Taibbi covers the campaign for Rolling Stone.

The first episode premiered yesterday, featuring Rep. Tulsi Gabbard (D-Hawaii), discussing the false alarm in Hawaii that got her to run for president and meeting with Syria’s Bashar al-Assad. It runs about an hour.

The podcast will also focus on stories “that were blacked out by national news media, while offering unsparing weekly takes on candidates, TV talking heads, campaign spokesgoons, academics and other monsters of the realm,” Taibbi explains in a post announcing the podcast.

The podcast will also offer debate night drinking games and other games to test audiences and the hosts on the political news of the week.

The recording of the episodes are filmed and published on YouTube.

“ ‘Useful Idiots’ is an iconoclastic take on the political podcast. Imagine a standard cable-news commentary show, and we’ll be shooting for its opposite,” Taibbi writes.