How One Green Thermos Has Endured Over Decades In Film, TV 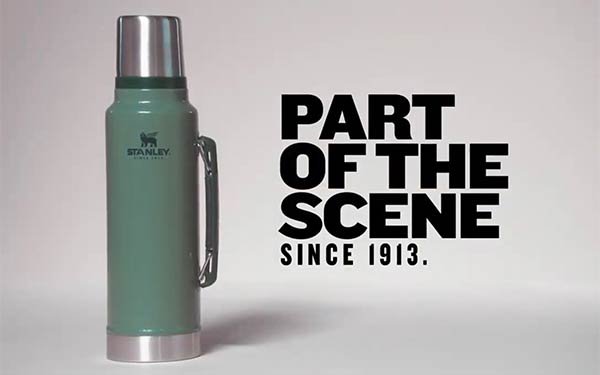 Thermos maker Stanley is leveraging its decades-long history of film and TV appearances into a new ad campaign.

The brand’s iconic green cylindrical thermos has appeared in numerous TV shows over the years, from “Charlie’s Angels” to “Seinfeld” to “Stranger Things,” and films like “Office Space.”

The campaign’s anchor TV ad from agency Hanson Dodge, dubbed "Channel Changer," comprises six fast-paced vignettes that include identifiable music and props but not actual clips from a selection of past shows and films that have featured the Stanley thermos.

Consumers can participate in a competition to identify Stanley placements featured in the campaign at www.StanleySightings.com. There is a cheat sheet with all 40 films and shows available on an IMDB watch list.

“Our creative challenge was to bring the campaign to life without the budget to license all 40 properties where Stanley bottles organically appear,” said Joe Ciccarelli, vice president/creative director for Hanson Dodge. “Our solution: empower consumers to connect the dots. We provided a handful of iconic elements from each film or show and challenged viewers to identify each Stanley sighting.”

Stanley, part of Pacific Marketing International, is also celebrating acting extras in the film and television industry through initiatives that include movie-poster-sized out-of-home ads, as well as digital advertising, and sponsorships like the one it did at last weekend’s Telluride Film Festival.