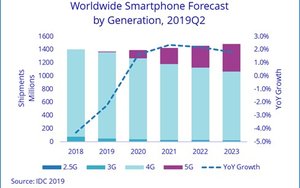 The smartphone business won’t get much better for the rest of this year, but the outlook for 2020 seems brighter, says the International Data Corporation’s quarterly mobile phone tracker report.

Although sales have picked up in the second half of 2019, IDC says full-year results should still be off 2.2% from the year before. In 2020, smartphone sales are expected to rise 1.6%, largely because of marketing new 5G phones.

Sangeetika Srivastava a senior research analyst for the IDC, says the forecast is slightly unclear. “The global smartphone market and relevant supply chains remain uncertain, largely due to fluctuations in U.S-China trade negotiations, making future planning even more challenging than normal," she notes in the report.

But she says the last part of 2019 should see aggressive marketing to clear out inventory and “get consumers excited about the next wave of smartphone technology.”

Introduced this year, 5G smartphones interest only early adopters at this point, but IDC expects that next year things should take off, with 5G smartphones projected to make up 8.9% of all smartphones sold in 2020 -- for a total of 123.5 million devices.

By 2023, IDC says 5G phones should command 28.1% of the smartphone market worldwide.

Separately,  the Consumer Technology Association trade group says an estimated 38% of U.S. households intend to purchase a smartphone in the next 12 months. It says 91% of all U.S. homes have a smartphone.

"The anticipation of 5G, beginning with smartphones, has been building for quite some time but the challenges within the smartphone market over the past three years have magnified that anticipation," said Ryan Reith, program vice president with IDC's Worldwide Mobile Device Trackers, in a statement. "To be clear, we don't think 5G will be the savior in smartphones, but we do see it as a critical evolution in mobile technology. We expect the 5G ramp on smartphones to be more subtle than what we saw with 4G, but that is primarily because we are in a much different market today” — not only in the U.S. but in Western Europe and China.

Smartphone sales began to slump a few years ago when consumers began to conclude that additional features in new phone models were not worth the hassle or the money. In January 2019, CEO Tim Cook wrote a letter to investors warning it was lowering its revenue projections for the holiday season quarter that had just ended, again, because of softer-than-expected iPhone sales and other factors.

Now, IDC says, “2019 will remain a challenging year for iPhone shipments, with volumes expected to drop to 177.9 million, down 14.8% year over year, mostly due to market maturity as well as a lack of 5G devices. However, Apple is likely to deliver 5G handsets later in 2020, which will pick up iOS volumes slightly.” And IDC says that because Apple is holding off on those 5G models as other companies launch theirs, it will benefit from the ability to observe and react to real-life market conditions.

IDC predicts that Android's smartphone share will increase to 87.0% in 2019 from 85.1% in 2018, mostly due to 5G launches and “expedited inventory cleanup of older devices.”